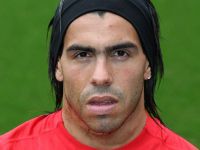 At 21,400 Euros per day, nobody can say that Carlos Tevez is badly paid - paid to train several times a week and paid to play soccer once or twice a week. True, every time he plays, at his level, he might lose two to three liters in liquids due to sweating and true, at his level he will cover some 9 kilometers in distance, most of it running and as a striker, a lot of it sprinting.

Yet just like every other area of life, soccer players are bound by something called a contract, which they are happy to sign when they see the salary on the bottom line but which they think they have the right to tear up on a whim or a caprice when things don't go their way. In the Case of Carlos Tevez, his contract lasts for a further three and a half years,until July 2014 and despite the fact that he cites family reasons for wishing to leave Manchester City (yet curiously, also cites a break-down in relations with "certain individuals") it is logical that just as with any other profession, there are consequences for a breach of contract.

It is a perfectly simple question of honouring a compromise such as a marriage contract or indeed an agreement for the rendering of services, which is after all what soccer players do, for an extremely high fee when they reach the top of their profession. If Tevez does not wish to honour his contract, then he has to accept the consequences of breaching it, just as he was happy to sign it so as to receive his massive salary.

Manchester City, meanwhile, have been swift to react, saying they will sue Tevez for 50 million GBP if he leaves, will punish him by taking away the Captaincy if he stays and will put him training with the reserves, as they scour the transfer market for a substitute, one of whom is already earmarked as being the Wolfsburg Bosnian striker Edin Dzeko, 24, whose 33.5 million-pound buy-out clause Manchester City seem willing to pay.