A fantastic performance by Serbia's tennis stars saw the Balkan giants defeat mighty France by 3:2 for the country's first Davis Cup victory in Belgrade. The win brings Serbia up to second place in the ITF Davis Cup Nations Ranking, behind Spain and ahead of the Czech Republic. 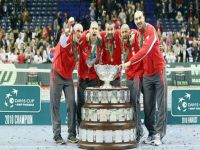 Serbia's historic win over France this weekend could not have been more dramatic. Janko Tipsarevic lost the first singles match to Gael Monfils in three straight sets (1-6, 6-7, 0-6) before Novak Djokovic squared the tournament at 1-1, beating Gilles Simon 6-3, 6-1, 7-5.

In the third round, the doubles, Nenad Zimonjic and Viktor Troiki took a two-set lead against

Serbia becomes the thirteenth nation to win the Davis Cup, which began as a competition between the USA and the British isles in 1900.