The Zenit central defender Bruno Alves, 29, is already the champion of Russia, and he spends these days in St. Petersburg in preparation for a game for the fifth round of the Europa League. After nearly six months in Russia he has become the team leader of Luciano Spaletti outfit and no longer complains of cold or Russian food. Interviewed be Pravda.ru he declared that with Paulo bento in charge of the national team, Portugal's objectives would have been reached. Read the full interview. 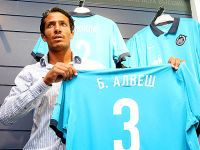 Pravda (P) - Mr. Alves, first congratulations on the Russian Premier League title. What can you can tell about the level of Russia's top league?

Bruno Alves (B.A) - Thanks for the congratulations. The level I found here is a good level. There are good teams like Spartak, CSKA and even when a championship is very competitive. I am positively surprised.

P- And do you feel satisafied here, professionally?

BA Yes, yes, I had high expectations coming here and right now I feel well both in the club and in the city. I am delighted to be playing here, playing in the Europa League and next year the Champions League.

P-After half a year playing in Russia, the Russian sports press highlighted you as one of the best lines of defense, and Mr., that player may stand out as the best in the league?
BA-I can highlight Danny and Kerzhakov in my team, they are the key players. Danny has been described as the best player here in Russia. We also have Denisov and Anyukov, who is our captain, they are good players. And there are several other players, like Vagner Love, there are other great defensive players.

P-As you said, Danny had been elected as the best player of this championship after a poll in the Sport-Express newspaper. Do you agree?
BA-Sure, Danny is a very important player for the club and has done much with his goals, and his passes. Without doubt, I think the choice was correct.

P- The Russian championship ended, what are you going to do during the break?
BA-Now go back to my hometown, in Portugal and I will spend the holidays there with my family.

P: So, you stay here alone?
BA-I was with my family in St. Petersburg, but after the children returned to Portugal and I am here with my wife.

P: You were summoned to the national team and played the last match against Spain. The Portuguese team was fully changed in terms of quality and desire to play. It was a fantastic game. How did Paulo Bento manage this in such a short time?
BA- I think that sometimes when you change coach, you can interpret things in a better way, more positive. With Paulo Bento we started to play better. I have no specific explanation for this. I think that Carlos Queiroz has also done good work, a good campaign for the World Cup and a good World Cup. As for football, there are things that have no explanation. I know things have changed and our team has achieved the objectives.

Q. What is your opinion about the "war" between Zenit and Spartak fans?
BA- Things like this are normal when there are 'derbys'. I think that in football these things happen, everyone wants to see their team win.

P: In Portugal are there similar things, with fights and violence?
B.A.-It happens, yes. When we have 'derbys' there are loads of police escorting the fans, to keep order, I think everywhere it is the same thing.

Q- How many years do you intend to stay at Zenit?
B.A. - I have a  four-year contract. And now as I feel well here I hope I'll fulfill my contract.

Q. And you have already got used to the weather, Russian food, are these things very difficult for foreigners?
B.A. - Yes I am used to them already. And St. Petersburg has many Italian restaurants and even a Portuguese restaurant.

P- Oh yeah? And did you like the quality of the food?
B.A.-I sure did.