Will Pavel Pogrebnyak be the next Russian to play in the English Premier League? The 12 million-pound price tag on Stuttgart's Russian striker seems not to daunt Liverpool FC manager, Roy Hodgson. 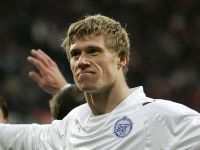 The site claims that Liverpool's new manager, who seems to be turning the club's fortunes, moving up into the mid-table positions, would like to buy six new players to reinforce his squad. Pogrebnyak would being in added firepower playing alongside Fernando Torres, a much needed asset due to Liverpool's poor start with ten goals in ten Premier League matches.

Omri Altman, the 16-year-old midfield player from Maccabi Tel Aviv, is already training with Liverpool on a trial basis.

Moving in the opposite direction, according to the same site, is Liverpool's defender Daniel Agger, connected to the north London giants and arch-rivals Arsenal FC and Tottenham FC. Another defender who could be set to leave is Glen Johnson, linked to Juventus.

Elsewhere in the Premier League, at Manchester United FC, Portuguese attacking midfield player Nani has declared that he is among the best players in the world. United is said to be tracking Wolfsburg's prolific Bosnian striker Edin Dzeko and possibly, Bayern Munich striker Bastian Schweinsteiger, who has been reported stating he would like a move to the Premier League.