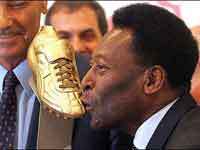 The king of soccer was born in the small town of Tres Korasoes in Minas Gerais on October 21, 1940 into a poor family. He started playing soccer in an amateur team at the age of 11, and at 15 he became a professional. His name is a symbol of Brazil's success, and it is no accident that companies literally tear him to pieces in order to attract advertising campaigns. Today, King Pelé earns 15 million Euros annually on advertising.

Interestingly, Edson never liked his soccer nickname. It appeared by chance. As a boy, he was rooting for his father's amateur team. Standing outside the gates, Edson particularly worried about the goalkeeper and encouraged him: "Come Bilé! Well done Bilé!" But he could not pronounce the first letter, and said the name as Pilé, which later was turned by soccer fans into Pelé.

"My real name is Edson, I did not come up with "Pelé". I never liked that name, because in Portuguese it sounds child-like. I wanted to be called by my real name Edson - in honor of inventor of the light bulb Thomas Edison," Pelé said in 2006 in an interview with "Bild".

Pelé went down in history as the only three-time world champion (1958, 1962 and 1970's). He scored 1284 goals in official matches (compare to Diego Maradona with 353 goals), invented many kicks and strikes, and gave the game its magical nature. Pelé was the first player who used a passing shot over the goalkeeper, who scored from the middle of the field in a game against the team of Czechoslovakia in 1970 in Mexico.

He is also the author of the bicycle kick. This famous kick with bouncing of the ball between the legs of the opponent is now rarely seen, and Pelé used this trick all the time.

He was wildly popular in the 1950-70s. It suffices to say that Nigeria suspended its civil war, when in 1967 the Brazilian national team conducted two matches.

At the end of his career, Pelé played for the American Cosmos. One of the coaches says that they had to bring 25-30 Pele shirts to each game to give away as souvenirs."Otherwise we would not have stayed alive, "said Gordon Bradley.

Brazilians and Argentineans are very jealous of each other's achievements and challenge the supremacy everywhere, including soccer, constantly comparing the two great Number Ten, Pelé and Maradona.

"Maradona is a player with a God-given talent. He was very lucky because, despite the drug addiction, there are still people who are willing to give him jobs. I would not hold him as the example for children. When I go to Argentina, I tell them: "First decide who is the best in Argentina, and then try to determine who is the greatest in the world," Pelé said on the eve of his anniversary.

He added that he was looking forward to a response from Argentina, however, Maradona has once said that Pelé was a museum exhibit, but was still involved in soccer. He echoed Argentinean fans, who indignantly observed that the drugs are sold to their idol by people like Pelé's son who was convicted of drug trafficking.

Nevertheless, these are emotions, but facts speak for themselves. Pelé is superior of the Argentinean in all soccer indicators. Pelé was a player fans would come to see.

"When soccer stars die away, their teams die away as well. Pelé will never die," said the world's greatest soccer player about himself.