The latest allegations of votes for money involving FIFA officials is, if true, yet another sickening reminder that where big bucks and sport get mixed up, sport, sportsmanship and fair play lose every game, being mere words bandied around cosmetically to serve as a cover-up for those who milk the system and make fortunes. 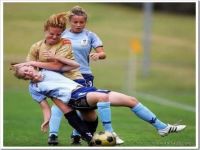 The latest scandal exploded after the British newspaper, The Sunday Times, sent in undercover reporters claiming to be lobbyists for a consortium of US companies wishing to bring the tournament to the United States of America, conducted a sting operation on Amos Adamu and Raynald Temarii, FIFA executive committee members from the Nigerian Federation and President of the Oceania Football Confederation.

In the operation, money was allegedly offered and accepted in return for votes for the "US bid", in the case of Adamu, 800,000 USD to build four artificial soccer pitches in Nigeria and for Temarii, financing for a sports academy. FIFA's reaction: "They have created a scam, a trap, tempting people to do something wrong" (Chuck Blazer, US member of FIFA executive committee).

Russia, England, Portugal/Spain and Belgium/Holland are the remaining bidders for the 2018 FIFA World Cup. FIFA President Sepp Blatter has declared that the scam has had a "very negative impact" on FIFA, which has the option to delay the decision for the venue past the original December 2nd timeframe.

Is this the first time FIFA and scandal have walked hand in hand? No, it is not. In the year 2000 FIFA allocated a $471,000 Goal Project grant to the Antiguan and Barbudan Football Association for the construction of a training centre outside St. Johns. Nothing was built and nothing was done until 2003, then the member ship of the Antiguan and Barbudan FA was suspended, then lifted in 2004. Still no building. In 2005, FIFA handed over a further $503,098. In 2008, it was reported1 that "193 out of FIFA's 207 members have been beneficiaries of the 366 grants awarded so far".

November 2009. A betting scandal broke, in which police raided addresses across Europe exposing a 200-strong band of criminals who had allegedly bribed players, referees and coaches in nine countries. It was reported at the time2 "Around 200 games played this season in Germany, Belgium, Switzerland, Croatia, Slovenia, Turkey, Hungary, Bosnia-Hercegovina and Austria are now under suspicion".

2006: "Jack Warner, one of Fifa's most senior and controversial figures, has been reprimanded after being involved in a World Cup ticket scandal - but has escaped any disciplinary action"3.

FIFA is once again "welcoming an investigation". What, again? Need we say more?