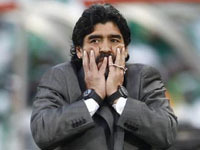 Argentina showed a very negative reaction to a recent statement from former football star Diego Maradona, who said that he was ready to become the head coach of the national team at all costs. Opinion polls showed that Maradona's intention finds support with only one in every ten respondents. Nowadays, many refer to the world's former best footballer as 'El Pelusa,' which translates as 'Fuzzy' with a negative connotation.

In his first public statement after the World Cup in South Africa, Diego Maradona said in an interview with Sport Fox that he would be ready to give his life to be the national coach of Argentina.

However, the polls conducted by the nation's largest online publications, such as Clarin and La Nacion, said that nine in every ten respondents voted against his return to the position. It seems that it will take Argentina a lot of time to forget the shameful game with Germany that ended with 0:4.

Diego Maradona is extremely unpopular in Argentina today. The press refers to him as La Pelusa, or Fuzzy, which was his nickname during the 1980s for his voluminous hairdo. These days, however, it is a negative nickname, based on the word 'pelo' - 'maybe' - which reflects his actions as the head coach of the national team.

Nevertheless, Maradona is thirsty for revenge. He stated that he had been offered to return, but he was asked to change his assistants, which he was ready to discuss. It is worthy of note that Maradona enjoys the support from Argentina's President Cristina Kirchner and her husband.

Prior to the interview, Maradona had had a meeting with former president Nestor Kirchner. After the meeting, it was reported that the ex-president wanted him back, although the former footballer did not ask for anything personally, as he later said.

It seems that Maradona has recovered from the humiliating match with Germany. Argentina's famous No. 10 was dismissed as coach after his team was humiliated by Germany in a 4-0 loss in the quarter-finals of the World Cup. The Argentine Football Association said he could keep his job, but only if he agreed to replace his assistants. Maradona said no, which led the AFA not to renew his contract and hire Sergio Batista as the interim coach.

Argentina is expected to name a full-time coach in the next few months and Julio Grondona, the president of the Argentine Football Association, said a month ago that it would take "very large problems" for Batista not to be given the full-time job, The Canadian Press nerws agency said.

Batista has led Argentina to wins in two friendly matches, defeating Ireland 1-0 and then adding an impressive 4-1 victory over World Cup champion Spain earlier this month.