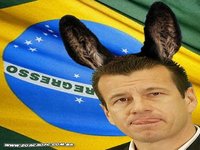 You lose a lot due to stupidity, but when it comes to an accumulation of collective idiocy, we reach a critical mass and exponential results which we saw this afternoon in Nelson Mandela Bay, where Brazil left the World Cup very early (for a 5-times-champion) simply because its players once again were convinced the game was in the bag.

The statistics of the game clearly demonstrate that Brazil was not inferior to the Netherlands: 15 shots to ten, eight corners against 4. Robinho's goal booked the Brazilian presence in the semi-final against the winner of Uruguay and Ghana, at minute 10', connecting lethally with a beautiful pass that split the Dutch defence. Holland seemed to have no options at the end of the first part, which also saw a brilliant defence by Stekelenburg, denying Kaka, and there were shots slightly over by Juan and Luis Fabiano. Júlio César was called to intervene on 11 '(Kuyt) and 36' (Sneijder).

This name, Sneijder, would exit the tunnel after the break with ambition carved on the face, like the rest of the Dutch team while the Brazilians left back in the boot room their common sense, the will to think, the ability to concentrate and something called team-play. Brazil only had to manage the result, closing the center and the wings, leaving no room for the Dutch and notcommitting defensive lapses. Nothing impossible for a champion.

It was precisely these things that Brazil not only insisted on not doing, but worse, created monumental confusions in the penalty area, giving encouragement to the orange team and sending shockwaves through their own players. If Júlio César came out of his area, he knew (at least he´s paid enough to know) that when the keeper comes out, it is to connect with the ball, or else stay in the goalmouth. He did this twice. The first was on 53 ', when Felipe Melo made the first of two favors for his colleagues, by introducing the ball into his own net and as if this were not enough, he was sent off on 73', after a childish spat, burying his studs into the leg of an opponent, lying on the floor. The second input from the Brazilian goalkeeper was accompanied by another total failure of communication among the defence, which witnessed the entry of Sneijder, finishing off with his head following a corner kick. 1-2.

Often, ten against eleven play better together. Brazil did the opposite. It seemed like a game of sons against Dads after the bar closed on a Sunday all washed down with rum and gin. Brazil never seemed able to score the second goal, and thus ended the second half with Holland's third closer than Brazil's second.