Serbia’s hero and FIFA man of the match today was goalkeeperVladimir Stojkovic who kept his team in the game by saving a second-half penalty, throwing Group D wide open.

In an ill-tempered game with nine yellow cards and one sending-off (Klose received two yellows) both teams built up attacks, Stojkovic being kept busier than Neyer. The turning point of the match was Klose’s sending off on 37’, Jovanovic scored on 38’. Krasic ran down the right and passed to Zigic who headed down to Jovanovic, running in. Germany continued to believe in themselves and Khedira hit the bar on 45 + 1’.

After the break, Stojkovic denied Bastian Schweinsteier after 54’ and the high point of the half was on the hour, when the Serbian goalkeeper saved Lucas Podolski’s penalty.

An exciting Group C match between a Slovenian side that plays attractive attacking football and a USA that not only battles but also puts together some excellent passing moves.

Slovenia were two up by 42’. Valter Birsa fired his shot into the top left-hand corner of Howard’s goal on 25’. The USA started to grow – Handanovic saved a Torres free kick and just as the USA was piling on the pressure, Slovenia counter-attacked. Novakovic passed to Ljubijankic, who made it 2-0 on 42’. 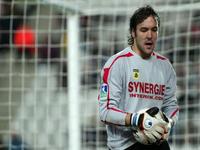 In the last minutes Edu put the ball in the net (disallowed), Novakovic headed just wide and Radosavljevic saw his searing shot saved by Howard.

England opened well, more aggressively, more incisive, playing the ball around the park and arriving in the final quarter of the field. For a quarter of an hour, team coach Fabio Capello was enjoying his 64th birthday.

After this, the second quarter of an hour belonged to Algeria, the experience of coach Rabah Saadane, present in all three of his country’s appearances in World Cup finals (Spain 1982, Mexico 1986, previously) showed through, in wave after wave of very mobile Algerian attacks.

England tried to fight back in the last 15 minutes of the first half, Gerrard seeing his shot saved by Mbolhi on the half hour. Two minutes later, the Algerian keeper made a great save, denying Lampard from close range. England seemed to have woken up, realizing that they had to up the tempo of their game to have any chance of taking it to the Algerians. On 39’, Mbolhi easily caught Barry’s shot and four minutes later, one from Rooney, both from outside the area because the England attack found it do hard to penetrate.

70’ – Heskey’s shot was blocked in front of goal by Halliche. England had nine corners in the second half, against Algeria’s one, witness to the way the game ran. The 0-0 is witness to the fact that England underestimated the group, calling it “EASY” (England, Algeria, Slovenia, Yanks) and if after two games, against the USA and Algeria, they have scored one goal and drawn two matches, the team has everything to prove against Slovenia.

Ashley Cole is the FIFA man of the match.