Maradona off the field, Park Ji-sung on it 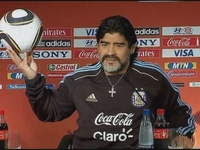 Maradona off the field, Park Ji-sung on it

One goal in each half saw the Republic of Korea beat Greece 2-0. Lee Jung-soo scored after 7’ and Park Ji-sung, FIFA man of the match, on 52. Had Torosidis buried his chance on 2’ and again a second some minutes later, the initial pressure exerted by Greece might have paid off. At this level if you do not take your chances and convert half-chances into goals, you go home early. After the goal, Korea dominated the game until Greece woke up right at the end. Too late.

Argentina started well, shaking the Nigerian defence and finally scoring after 6’ (Heinze), after Tevez missed his chance in front of goal on 3’ and Messi saw the excellent goalkeeper Enyeama (FIFA man of the match) keep Nigeria in the game, a feat which he repeated time and again.

After 21’ Enyeama saved again, denying Higuain, on 38’ again from Messi. It seems the Nigeria goalkeeper created another chapter of his career this afternoon and looks set to move on to higher places than his current Hapoel Tel Aviv.

Nigeria’s best chance in the first half came on 28’ when Yakubu just failed to make contact with a pass which fell a yard in front on him in the goalmouth.

After the interval, Argentina started strongly and Messi failed the last touch on 46’. Three substitutions on both sides did nothing more than perpetuate the status quo, Argentina happy with the 1-0 and Nigeria not having the imagination or skill on an individual level to do anything about the scoreline.

Enyeama pulled off another brilliant save on 80’, saving a Messi rocket at point-blank range.

Argentina, despite the three points, appeared less effervescent than the figure of team coach Diego Maradona, who spent the entire 90 minutes strutting back and forth in the area designated for the team coach, gesticulating, posing and screaming as if it were he that was on the stage. His Argentina today was very far from the electric team which hoisted the Cup in 1978 and 1986, possibly because the team had instructions to play to Messi when there were often other options.

Group B (After one game)