Inter Milan had the stamp of its Portuguese coach Jose Mourinho all over it tonight in Real Madrid’s Santiago Bernabeu Stadium. Tactically superior, Inter knew how to take advantage of the chances which appeared (Diego Milito had two shots, both on target, and scored two goals) while the team defended as a block, closing the spaces around Julio Cesar’s goal. 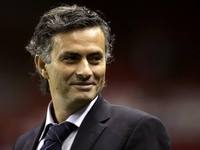 In the first half, Bayern had a slightly higher percentage of the attacking game, with ten attacks against Inter’s seven, but the Bayern coach is called Van Gaal and Inter’s, Jose Mourinho. And here was the difference. Inter knew when to score, when to close and how to manage the game. Bayern fought well, fought hard but each time they went forward, came up against a brick wall.

The first 45 minutes were fraught with a frantic to-fro between the teams, Bayern appearing at 10’, when Olic shot wide. Maicon copied for Inter a minute later. Bayern came back through Altintop (blocked on 13’) and Van Buyten, idem (16’). Inter responded through Sneijder, shot saved on 18’ and on 19’, Cambiasso’s shot was blocked.

On 35’, 1-0 to Inter Milan. Diego Milito received a long pass from goalkeeper Julio Cesar, headed to Sneijder, who made the final touch enabling Milito to flick the ball over the advancing Jorg Butt.

41’ Altintop (Bayern) was on target again, then seconds later, his team-made Robben shot wide. On 43’ Sneijder shot at Butt and the first half finished with Bayern Munich desperately searching for the equaliser. On 45’, Olic shot wide and within seconds, Van Bommel had a shot blocked and sent another off target.

Bayern started the second half with determination but basically it was more of the same. Inter Milan had another 7 attacks, Bayern reduced to ten. The result was another goal for Inter, this time after 25 minutes.

This half was also balanced, Bayern starting to create chances on 46’ (Julio Cesar saved from Muller) mirrored by Pandev at the other end a minute later. Robben (Bayern) was blocked on 52’; Sneijder (Inter) sent his free kick wide on 54’.

Seconds later, Altintop (Bayern) shot wide, the same player had a shot saved on the hour, Muller having the same luck on 63’. Julio Cesar (Inter’s keeper) was electric tonight.

Bayern pressed forward, Cesar saving from Robben on 65’. On 68’, Mourinho took off Chivu and sent on Stankovic and two minutes later, the second breakthrough came. Milito scored his second, burying the game and sending Inter 2-0 up. Receiving the ball just outside the area, he skinned Van Buyten and shot high to Butt’s left.

Bayern kept trying, Robben being blocked on 81’ and 83’. By the time Van Bommel had Bayern’s final chance on 90’ (shot blocked), Mourinho had sent on Materazzi (central defender) for Milito. The shop was closed. 2-0.