Ice Hockey: Russia Thrashes Canada 5-2. The Men and the ….boys. 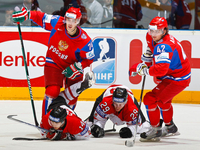 Ice Hockey: Russia Thrashes Canada 5-2. The Men and the ….boys.

We do not this time need an alcoholic loser (yeah we do our research) from some obscure radio station to come making claims and insults. Russia, basically, is superior. Russia 5, Canada 2. As the Queen might say, Speaks for itself, what?

Let us see the game.

But the procession has not left the churchyard yet. Third period. Konechno! Up your…maple syrup! (cough) 47.31 minutes. A Mr. S. Federov. Sergei Fedorov. 4-0. Wow!

Great game of hockey. Jolly hockey sticks, what? As the Queen might say as she smiles down from a Kanucki postage stamp. Hang on. On 53:52 some Portuguese, sorry Canadian, called Tavares gets one back. Ei, pá, fantástico!!

Ai caramba, as Bart Simpson might say. It did get worse (chuckle), as in five-one by Evgeni Malkin on 56:56. A tad embarrassing, what?

No, but the kanucks got one back, on 59:46, an M. Duchene. Wow, hearty congratulations, Canada, you managed to score two goals against Russia. Problem is, Russia scored five against you.

Yeah how does it feel to be a loser? How do we like our Canadians? On their (cough)ses! (See the pic). Smilie. Take it like I took your insults and hacking attacks. Kiss kiss.