And After Guus Hiddink?

The Russian national soccer team is as from yesterday officially in a post-Guss Hiddink trauma syndrome, although it might not know it yet. If Hiddink didn’t do it, who can? Who can make this group of players perform like those boys who ate the grass in the Summer of 2008, or who can make the perfect balance between the Russia of EURO-2008 and post-Maribor 2009? A name appears… two actually… 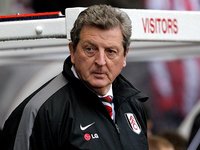 And After Guus Hiddink?

Guus Hiddink took Russia to a pinnacle the team had not reached for many years, gaining third place in the UEFA 2008 after stunning performances, principally against Holland. Everything led us to believe that the team would build on this success and go further.

The FIFA 2010 campaign was good, very good but with one stone in the shoe: Germany in the group. But for a dose of bad luck in both games against Germany, Russia would today be making travel plans for South Africa. Under Hiddink, Russia finished second in the qualifying group for the FIFA World Cup 2010 in South Africa behind Germany, with 22 points – the best second place, and enough to win several other groups outright. Everything seemed set for a victorious outcome in the play-off over two legs with Slovenia.

Instead, a poor lacklustre and tired performance in both legs of the play-off (2-1 in Moscow and 0-1 in Maribor) spelt the end of this generation and a full stop in Hiddink’s aspirations in Russia. The team was a shadow of itself just one year previously. Slovenia qualified for South Africa on away goals. Russia will watch the finals on TV.

He leaves declaring that “Do svidanya” means not “Goodbye” but “Until I see you again”, meaning that the possibility of a come-back is open and departs for Turkey, where he will take up the challenge of coaching the national team in August.

After Hiddink who is next? The internal figure may be Kurban Berdyev who took FC Rubin Kazan to two successive championships in the Russian Premier League. Certain limited experience in Europe was a positive but the international career is limited. The external one may be the British Roy Hodgson. His pedigree is enviable: In club football, he has managed Viking FK, Malmo FF, Internazionale, Blackburn Rovers, Grasshoppers, FC Copenhagem, Udinese and is currently at Fulham FC. As national team manager, he took Switzerland to the 1994 World Cup Finals and the Euro 1996 Finals.

Having worked in UEFA and FIFA technical groups and being multi-lingual, Roy Hodgson has international experience which may prove irresistible to Russia.

Time will tell. But now that Hiddink has closed the door, who else?