Aleksandr Tretyakov adds to the Russian medal tally with a Bronze in the Men’s Skeleton, bringing Russia’s medals total to five (1 gold, 2 silver and 2 bronze) in a Vancouver Olympics which never promised to be favourable to Russia, even before the Games started. Scandal has followed scandal, ranging from a death on track to the incredible ruling in the men’s figure skating. 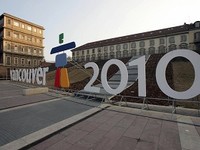 Aleksandr Tretyakov’s Bronze medal in the men’s Skeleton on Day 8, February 19, came as a welcome accomplishment after the scandal of Evgeni Plushenko’s Silver the previous day after a brilliant display in the men’s figure skating, won by the American Evan Lysacek with a very lacklustre performance. Japan’s Daisuke Takahashi got the Bronze.

On Day 7, the women’s curling team lost 3-10 to Britain, while the ice hockey brought mixed results: the women beat the PR China 2-1 and the men lost by the same result to Slovakia.

On Day 8, February 19, the women’s curling team lost 4-6 to the USA and then lost again 5-8 to Switzerland. In the Men’s Super-G Alpine Skiing, the Russian trio Aleksandr Horoshilov, Stepan Zuev and Sergei Maitakov managed classifications of 28, 36 and 55 in an event won by Norway’s Aksel Lund Svindal, with the Americans Bode Miller and Andrew Weibrecht taking Silver and Bronze.

In the women’s skeleton, Elena Yudina was 18th while Gold went to Britain’s Amy Williams, Silver and Bronze to Germany’s Kerstin Szymkowiak and Anja Huber.