Hiddink Stays in Charge of Russia

The meeting on Thursday between the new President of the Russian Football Union Sergei Fursenko and the Manager of Russia’s national soccer team Guus Hiddink ended with a decision for the Dutchman to stay in charge of the team he led to the bronze medal in EURO 2008 for a further two years. 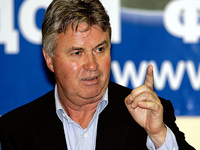 Hiddink Stays in Charge of Russia

The speculation is over. Guus Hiddink stays as Chief Coach of the Russian national soccer team for a further two years after his contract runs out in June, giving him the chance to lead Russia to the UEFA finals in 2012 in Poland-Ukraine. Guss Hiddink arrived in charge of Russia in 2006 and led the team through a brilliant qualifying phase to the finals of the UEFA Euro 2008 in Austria-Switzerland, finishing in equal third place with Turkey.

Under Hiddink, Russia finished second in the qualifying group for the FIFA World Cup 2010 in South Africa behind Germany, with 22 points – the best second place, and enough to win several other groups outright. Everything seemed set for a victorious outcome in the play-off over two legs with Slovenia. It ended in disaster, with a 2-1 win in Moscow and a 1-0 defeat away in Maribor in a disorganised, lacklustre and tired performance which saw the team as a shadow of itself just one year previously. Slovenia qualified for South Africa on away goals. Russia will watch the finals on TV.

The new President of the Russian Football Union is Sergei Fursenko, ex-President of Zenit S. Petersburg, who has high ambitions and has made it clear that Hiddink will take on much more than simply managing the senior soccer team, but rather “the development of our game” as he stated in an interview with Russia 24.

The first objective of Sergei Fursenko will be to weed out undesirable elements in Russian football, who bring allegations of match-fixing and corruption which do nothing to dignify the game. While this has permeated through Soccer at various levels in many countries, Russian football promises to be clean under Fursenko

Secondly, Fursenko has vowed to concentrate on Russia’s bid to host the 2018 FIFA World Cup (opponents in Europe are England, Spain/Portugal and Belgium/Netherlands). Thirdly, Fursenko has claimed “I am convinced we will win the 2018 World Cup and on the way, we will achieve many other victories”.