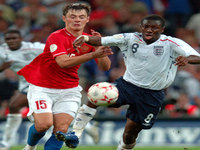 The dream of 24-year-old Russian midfielder Diniyar Bilyaletdinov, FC Lokomotiv Moskva, was to play in the English Premier League. His dream has come true – Everton FC have confirmed that they have signed the player for five years “for an undisclosed fee”.

However, some Russian news sources are quoting English rumours that the fee was in fact for 10 million GBP (16.37 million USD). A five-year-contract has been signed, confirmed by the club, in Hamburg (Russians can enter Germany without a visa) and pending his visa to play in the UK, the Russian international (28 caps) will make a start for Everton FC in the beginning of September.