Investigation filed into death circumstances of Russian 19-year-old hockey star Aleksei Cherepanov lasted for almost a year. During a hockey match the young man felt bad and lost consciousness. There was no ambulance in the sports palace, moreover, when doctors arrived, their defibrillators were discharged. 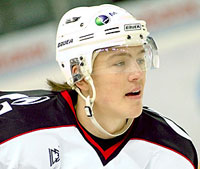 The Omsk regional investigating committee presented the results of the investigation Thursday: Cherepanov was suffering from a serious heart disease - chronic myocarditis - for more than a year. Professional sports are prohibited by this disease. However, neither club doctors, nor n health centre experts could reveal the young hockey player's disease.

An officer with The Omsk Public Prosecution told journalists that the boy’s disease that was difficult to diagnose. The picture, which the club doctors observed during a medical survey, could not make them suspect, that the hockey player was seriously ill. A profound research was required, but С herepanov did not complain to the doctors. The officer emphasized that there was no basis for a criminal case initiation. Aleksei’s death was purely incidental.

By the way, the lawyer of Сherepanov's mother asked to enter some photos upon the record. The photos depicted doctors making intravenous injections to Aleksei.

Public Prosecution officials reported that they had studied the photos, but found no objective evidence, that they were the club doctors, who injected Aleksei or that those photos were taken in the sports club.

Cordiamin was found in the sportsman's blood during examination. This medicine is used for preventing lung and heart diseases. Who injected Aleksei that medicine? Moreover, this medicine is considered a doping. The experts' assumption is interesting at this point. By their opinion, Cherepanov felt bad, but concealed that from the team doctors not to be excluded from the games. Afterwards, Aleksei by someone's advice decided to take the drug which was banned in sports.

The doctors did not know about the sportsman's serious disease, investigation officers said.

Aleksei's mother is going to appeal against the results of the investigation. She said that her son was absolutely healthy. Moreover, he treated sport seriously and never took any drugs without the club doctors’ advice.