Fans beg Romanian tennis star not to reduce her breasts

Simona Halep, a 17-year-old tennis star from Romania , said that she would soon have a surgery to have her breasts reduced. The statement caused panic among Halep’s fans. The number of her fans has skyrocketed, and many of them began to collect signatures against the breast reduction surgery, GoTennis website said. 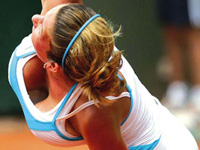 Fans beg Romanian tennis star not to reduce her breasts

Simona Halep has 34dd breasts. The tennis star recently said that she could not play normally because of her large breasts. The breasts weigh about 12 kilos, which makes it rather difficult for the Wimbledon hopeful to move quickly on the tennis court.

Simona’s fans have already begun to collect signatures protesting against the athlete’s decision. Some of them even said that Simona’s breasts were a part of UNESCO’s legacy.

Simona Halep is a Junior tennis player. She is ranked #258. She won the Junior French Open tennis tournament in 2008 and got to the second round of the qualifying for the Senior French Open in 2009.

Breast reduction is an outpatient surgical procedure which involves the reduction in the size of breasts by excising fat, skin, and glandular tissue; it may also involve a procedure to counteract drooping of the breasts. As with breast augmentation, this procedure is typically performed on women, but may also be performed on men afflicted by gynecomastia.

The surgery, which the Food and Drug Administration has called "good medicine", is quickly gaining popularity. In 2005, over 113,000 women had breast reductions, an increase of 11 percent from 2004.