The young sportswoman nicknamed Bronya (translates from Russian as 'armor') has been going into extreme power lifting sports for only two years, but she is already considered to be the strongest Russian woman. 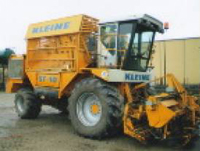 22-year-old Marina Kigeleva moved forward a 14-ton harvester for a dare and set a new record in Russian power lifting.

Marina Kigeleva weighs 100 kilos. She works as an investigator in a police department of her hometown. She decided to go into so called 'strongman' sports after her demobilization from the Russian army where she served under the contract at the tank division canteen.

“Marina had a bet with her male friends and set a new record. She moved the 14-ton harvester for more than 2 meters uphill on the rough country road”, says Dmitry Kononets, the president of the Chelyabinsk club of extreme power lifting.

Pravda.Ru previously reported about 12-year-old Ukrainian girl Varya Akulova who is capable of lifting up to 350 kg, while she herself weighs only 40 kg.

At the age of three she managed to lift her first “hundred”; a year later, Varya earned her first adult trophy. This youngster has tremendous will-power, translucent body and thread-like tendons.

Click here to see the photo report about Varya Akulova.

Her muscles are barely visible. It is quite difficult to grow any on day-to-day spaghetti diet. Thing is, there is nothing else for her to eat. The reason is simple: lack of money. Despite her age, this young weight-lifter already supports her entire family. Varya strongly believes that one day she will definitely become an Olympic champion.

Ms. Akulova is the strongest girl on the planet. This fact has already been confirmed twice by The Guinness Book of World Records. She lives in the Ukrainian miner’s town of Krivoy Rog.

Click here to read the full text of the article about Varya Akulova.