Chile’s national Andrea Paredes found herself in the center of a second curious story in world tennis. Paredes, who was born as a boy named Ernesto, underwent a sex-change surgery in 2000. She has been truing to become a professional tennis player and take part in ITF and WTA tournaments for nine years already, The Sovetsky Sport newspaper wrote. 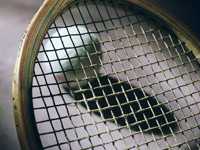 Paredes started her (his) career in tennis as a man, but then decided to realize his dream and become a woman. No one accepted the new image and body of the tennis player, save for his (her) parents. Andrea-Ernesto Paredes lost all her friends and collogues. However, the newly made woman did not even think to quit her tennis career.

To her great misfortune, official tennis associations refused to accept a second transsexual player in the history of tennis. The Chilean Tennis Federation did everything possible not to let Andrea rent tennis courts for her training. The International Tennis Federation passed new regulations in 2005, which included a paragraph about homosexual individuals.

Andrea Paredes had mastered a new profession by the time when the new ruled came into force. She became a financial advisor, but she did not quit her sports training. She later obtained a wild card for an ITF tournament in Buenos Aires , where she lost within 31 minutes.

Andrea is 37 years old now, but she is not going to give up. The woman is eager to participate in the WTA tournament at least once in her lifetime.

Renee Richards (born as Richard Raskind in New York City in 1934) became a first transsexual individual in the tennis world. She won her right to participate in WTA tournaments in 1977, reached the 22nd position on the women’s rating and finished her career at age 43.