Over 650 football fans were arrested during the recent Spartak Moscow - Zenit St. Petersburg match at Moscow’s Luzhniki stadium, Itar-Tass reports. Most of them – 513 men - were the fans of the renowned team from St. Petersburg. “They were arrested for smashing stadium seats, for lighting up smoke flares and using firecrackers during the game,” a source from the Moscow law-enforcement agencies said. 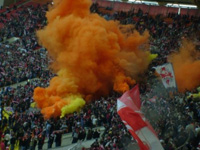 About 8,000 Zenit supporters repeatedly tried to put up a fight with the fans of Spartak Moscow and the police. "They were ripping up stadium seats and throwing them at the supporters of their rival team. They also used fire crackers and smoke flares,” a police officer said.

“The police officers at the stadium took a civilized attitude towards the violence and didn’t swallow the bait. They took measures to prevent a massive fight at the stadium,” an officer said.

About 660 fans were detained for disorderly behavior in total.

The opening day match of the 2009 Russian Premier League season had attracted approximately 52,000 fans to the Luzhniki Stadium. The game finished 1-1.

FC Zenit Saint Petersburg is a Russian football club from Saint Petersburg . Founded in 1925 (or in 1914 according to some Russian sources), the club plays in the Russian Premier League and currently is the richest in the country, owned by Russia’s natural gas monopoly, Gazprom. Zenit are the 2007 champions of the Russian Premier League, the holders of the 2008 UEFA Cup and of the 2008 UEFA Super Cup after beating Manchester United 2-1 in Monaco.

FC Spartak Moscow are nicknamed "Meat" (‘Myaso’ in Russian) because the club was owned by the Collective Production Farms during the Soviet era. Spartak have won 12 Soviet championships (second only to Dynamo Kiev) and 9 of 16 Russian championships. They have also won the Soviet Cup 10 times and the Russian Cup 3 times. Spartak have also reached the semi-finals of all three European club competitions.