The coach of Russia’s national team can combine the task of being a national team coach and coach of Chelsea FC. The Russian Football Federation gave the green light, so Hiddink will go to London on Thursday for talks with Roman Abramovich. 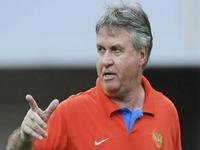 Quoting sources in Russian Federation Soccer, RIA Novosti said on Tuesday that the Dutchman Guus Hiddink, national team coach of the Russian soccer team, the team that he took to the semifinals of the EURO 2008 competition, is going to be in London on Thursday to talk with the President of Chelsea FC, Roman Abramovich, to combine the task of coaching the national team with coach of Chelsea FC.

The RIA Novosti source "in the concentration of the national team" said that Hiddink is going to London with his lawyer after the merger ends on Thursday and said that "the question of signing a contract may be resolved in the coming days."

In Hiddink‘s favor, besides his experience, it is the fact that the Russian Federation gave the green light to the possible combination of two tasks, since Russia has only two qualification games for World Cup 2010 during the remainder of the season. Russia will be at home to Azerbaijan and away to Lichtenstein. Besides, the National Academy of Soccer, which pays Hiddink's salary, is the property of Abramovich and the contract of the coach includes a clause that allows working in a national or foreign club.