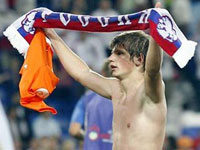 The Russian Football Union plans to sign a cooperation deal with Adidas, the largest maker of sports gear, a source close to the Russian national football squad said.

“The contract signed with Adidas will automatically terminate the contract with Nike, the previous technical sponsor,” the source said no conditions on anonymity.

The source did not specify the amount of the contract with the new sponsor – it was only said that it would be a very large amount.

The sum of the contract may overcome 100 million euros, Interfax reports. Financial details of the deal will be exposed at a joint press conference of the Russian Football Union and Adidas on September 8.

The agreement between the Russian Football Union and Adidas embraces the period before 2016, Russian news agencies said.