Pop stars, choirs, dancing policemen and a boisterous singalong to "We Are The Champions." After the orderly precision of the Beijing Olympics, it was time on Sunday for a first look at what organizers hope will be the fun of London 2012. 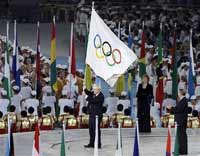 About 40,000 flag-waving people gathered in front of Buckingham Palace for a party to celebrate the handover from Beijing as the British capital got its first chance to show what it hopes will be a quirky, personal and fun approach to the Games.

As music played from a huge stage erected next to the ornate gates of Queen Elizabeth II's official London residence, even the police indulged in a brief embarrassed dance when invited to by the master of ceremonies - a sight difficult to imagine in China.

Admittedly, even a flyby from the Royal Air Force's famed Red Arrows aerial acrobatic team couldn't make the show compete with the scale and coordination that wowed athletes, officials and fans alike in Beijing over the past two weeks. But in terms of conveying what London has to offer to visitors when the Olympics arrives in town, the show did its job. Even the summer weather played along in living up to its reputation, providing warm sunshine and cooling showers in equal measure.

"Every city has had its big twist on the games, what they have that's different to every other county," said swim star Michael Phelps, who was at the London show. "The Olympic movement is about bringing the world together. I'm not sure what that difference will be but I'm looking forward to seeing what it is and how this city develops."

London organizers have long known they are unable to match Beijing in terms of scale, not least because London's Olympic budget of 9 billion pounds is less than half that of its predecessor.

But Sunday's show - with its occasional awkward pauses, high spirits and relentless audience participation in dance-offs, competitions and Mexican waves - suggested that London is set on providing a total contrast to what has been described as Beijing's "no-fun games."

Even if that means mustering self-deprecating laughter at one's own shortcomings.

"We will draw on our wit, flair, imagination and ingenuity to build on what we've all witnessed in Beijing and deliver a fantabulous Olympics in what I consider to be not only my home, but the home of sport," London mayor Boris Johnson said from Beijing. "Sport is coming home."

In a city with a long history of music hall entertainment, it was probably appropriate that the gathered masses of families, fans, teenagers and tourists were entertained by some of British television's most popular entertainers.

"I can't believe they're really here," said 14-year-old McFly fan Lisa Evans, who said she had arrived at 7:30 a.m. to see her idols perform their two songs almost six hours later. "This is the best thing about the Olympics."

Many of the performers seemed equally excited by the games coming to London.

"I'm London born and bred and I think it will do really big things for the city," singer Sophie Ellis Bextor said after singing James Bond theme "Nobody Does It Better" over a backdrop of images depicting Britain's 19 gold-medal successes from Beijing.

Organizers have promised to hold a more relaxed Olympics, which was already on display in Beijing when Johnson was unable to contain his excitement as he prepared to receive the Olympic flag from IOC president Jacques Rogge.

After saluting the crowd as he strode out to the center of the stadium, Johnson stood clenching and unclenching his fists in a "give it to me" gesture as he waited to grab the flag.

The London crowd laughed appreciatively at the mayor, who is depicted in the British media as the latest in a long line of lovable bumbling figures of fun.

"The next Summer Games return to a country which I frequently boast has either invented or codified just about every major world sport," Johnson said.

As a beaming Johnson waved the huge flag, 650 buildings across Britain, including local government offices, raised handover flags of their own to mark London becoming the Olympic city. Another 80 flags were raised in British sites, such as embassies, around the world.

British cyclist Bradley Wiggins, who won two gold medals in Beijing, said the mood created by Britain finishing in a shock fourth place in the medal table had helped contribute to a party atmosphere that seemed to temporarily trump the pessimism caused by the global credit crunch.

Phelps and Wiggins were cheered on stage, but some of the biggest cheers from the London crowd didn't have anything to do with what was unfolding in their own Olympic city. They were reserved for Beckham's appearance in Beijing.

"The eyes of the world have been on Beijing for the last two weeks as they have staged one of the most spectacular and uplifting Olympic Games ever," London 2012 deputy chairman Keith Mills said. "For a short amount of time today, however, the world stopped and considered what's coming next."