The pre-Olympic development of Beijing cost over 40 billion dollars. The total cost of the Beijing Olympics may exceed $44 billion, an official spokesman for the city authorities said, RIA Novosti reports. 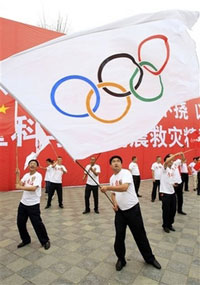 The total cost of the Beijing Olympics 2008, which promises to become the most expensive Olympic event in history, constitutes of three parts.

The total amount of the Games will be exposed afterwards. Beijing authorities have invested 280 billion yuans ($40.9 billion) in the development of the city infrastructure, the transport system and the ecology from 2001 to 2008.

In addition to the development of the city, the total budget of the Beijing Olympics includes the cost of operations conducted by the Olympic Committee (over $2 billion) and the construction and reconstruction of sports facilities (about $1.9 billion).

Ten thousand, five hundred athletes are expected to compete in 302 events in 28 sports from August 8 to August 24, just one event more than was on the schedule of the 2004 games. The 2008 Beijing Olympics will also mark the third time that Olympic events will have been held in the territories of two different National Olympic Committees (NOC): at the 2008 Olympics, equestrian events will be held in Hong Kong, which competes separately from mainland China.

The Olympic games were awarded to Beijing after an exhaustive ballot of the International Olympic Committee (IOC) on July 13, 2001. The official logo of the games, titled "Dancing Beijing," features a stylized calligraphic character jīng (meaning capital), referencing the host city. The mascots of Beijing 2008 are the five Fuwa, each representing both a color of the Olympic rings and a symbol of Chinese culture. The Olympic slogan, One World, One Dream, calls upon the world to unite in the Olympic spirit. Several new NOCs have also been recognized by the IOC.

The Chinese government has promoted the games to highlight China's emergence on the world stage and has invested heavily in new facilities and transportation systems. A total of 37 venues will be used to host the events including 12 newly constructed venues. Earlier in 2007, former IOC president Juan Antonio Samaranch had said that he believes that the Beijing games will be "the best in Olympic history," and despite the controversies that have marred the image of the Chinese Olympics, current president Jacques Rogge asserts that the IOC has "absolutely no regrets" in choosing Beijing to host the 2008 games.