Serena and Venus Williams likely to be in Wimbledon final together

Don't tell Serena Williams that sister Venus is the one to beat at Wimbledon. 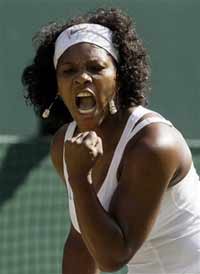 Serena and Venus Williams likely to be in Wimbledon final together

The Williams sisters, who between them have won six of the last eight Wimbledon titles, are one round away from a third Wimbledon title matchup and seventh Grand Slam championship showdown. Neither has lost a set so far, and their power games have set them apart from the rest of the women's field.

"That would be amazing if we both were in the final," defending champion and four-time winner Venus said after beating Tamarine Tanasugarn 6-4, 6-3 Tuesday to reach the semifinals.

Two-time champ Serena caught some of her sister's match before going out and sweeping Agnieszka Radwanska 6-4, 6-0.

"Watching the competition a little bit," she said.

Next up for sixth-seeded Serena on Thursday is Zheng Jie, who became the first Chinese player to reach the semifinals of a Grand Slam by beating Nicole Vaidisova 6-2, 5-7, 6-1. The 133rd-ranked Zheng is also the first wild-card entrant to reach the women's semis at Wimbledon and second at any Grand Slam.

No. 7 Venus will next face No. 5 Elena Dementieva, who wasted a 5-1 lead and two match points in the second set before beating fellow Russian Nadia Petrova 6-1, 6-7 (6), 6-3 to reach her first Wimbledon semifinal.

Venus was limping slightly at the end of her match with what she said was a tight left hamstring.

The Williams sisters will be heavy favorites to meet in their first tour final since the 2003 Wimbledon championship. Serena won that match in three sets, following up her straight-set win over Venus for the 2002 title. Serena leads Venus 5-1 in Slam finals and 8-7 overall.

The women have a day off Wednesday, which is set aside for the men's quarterfinals. For the first time at a Grand Slam in the 40-year history of the Open era, all eight quarterfinalists are from Europe.

Federer was scheduled first up on Centre Court against Mario Ancic, the last player to beat him on grass - in the first round of Wimbledon in 2002. Since then, Federer has won 63 consecutive matches on grass and 38 in a row at the All England Club. He's also won five straight against Ancic.

The winner of that match will advance to the semifinals against No. 94-ranked Rainer Schuettler or No. 145-ranked Arnaud Clement. The 32-year-old Schuettler is playing in his first Grand Slam quarterfinal in five years, and Clement last reached the final eight at a major in 2001.

Two-time major champion Marat Safin will play in his first Grand Slam quarterfinal since winning the Australian Open in 2005. His opponent will be No. 31-seeded Feliciano Lopez, with the winner to face the Federer-Ancic winner.

It's been five years since Serena won the Wimbledon trophy, and the last of her eight Grand Slam titles came at the 2007 Australian Open.

Serena, who fell to Venus in the Wimbledon semifinals in 2000, said it hurts less to lose to her sister.

"I mean, I'll be bitter but at the end of the day it's a lot easier losing to someone that I feel I should normally beat," she said.

Serena was asked how the sisters, who are sharing a rented accommodation in Wimbledon village, would handle breakfast on Saturday morning if they are in the final.

"I'm going to sabotage her and eat all the breakfast," she said with a smile. "I'll eat all the Wheaties (cereal) so she doesn't have any chance, if we get that far."