Organizers of the Poverty Olympics are seeking an official role in the Vancouver 2010 Olympic and Paralympic Games. The Poverty Olympics include special games designed to highlight the failure of host governments to meet bid commitments on housing and homelessness. 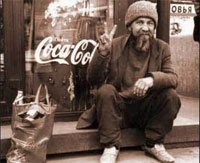 "When people visit Vancouver in 2010, they will be treated to eye-popping scenery, efficient services, and relaxed and friendly residents," says Wendy Pedersen of Carnegie Community Action Project. "But they'l also be treated to a city that could have more homeless people than athletes competing in the 2010 Games."

"We want the world to know that Vancouver and BC have world class levels of poverty and homelessness," says Jean Swanson of the Raise the Rates Coalition. "More than 2,000 people in our city are homeless today. Many are so poor they have to search through the garbage for food and things to sell."

Poverty Olympics organizers want the IOC to press governments (municipal, provincial and federal) that backed the 2010 bid to make good on their sustainability commitments. These commitments included promises to build affordable housing and ensure no one is displaced or made homeless as a result of the Games.

Last year, the Vancouver Organizing Committee's own Inner-City Inclusive Housing Table called for a number of government policies that would reduce poverty and homelessness. They included significant improvements to social assistance (welfare), and the creation of more than 3,000 new units of social housing. To date, little action has been taken.

In 2007 alone at least 561 low-income housing units in Vancouver were lost to demolition, conversion or rent increases. The Downtown Eastside neighbourhood of Vancouver has an HIV rate similar to Botswana's and British Columbia has the highest rate of child poverty in Canada, at 21 per cent. "This is all completely unnecessary," said Swanson, "because our province had a budget surplus of $4 billion last year."

"Vancouver's Mayor, Sam Sullivan, asked in his inaugural address 'When the world arrives in Vancouver in 2010, what kind of city will they find?' "We hope it will be a city where all citizens matter, and no one is left to fend for themselves on the street," said Pedersen.

The First Annual Poverty Olympics will take place on February 3, 2008 in Vancouver's Downtown Eastside, where poverty and homelessness are especially acute. They will feature the lighting of an End Poverty Torch created by local artists, opening ceremonies, and events such as the Poverty Line High Jump and the Long Jump over a Bedbug-Infested Mattress. Poverty Olympics mascots ­ Itchy the Bedbug, Creepy the Cockroach and Chewy the Rat ­ will be unveiled.