Rich people may feel bored at times and at such moments they are ready to spend huge money just to get some entertainment. The entertainment industry offers a wide range of services to make people laugh. This may be a high-society party with living statues or shark hunting, for example. Some people actually do not think about money when they want to get extraordinary and exclusive entertainment. 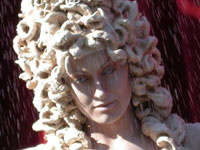 It is getting popular in Russia now to have living statues at parties. The statues are "hired" to frighten the party-goers which is obviously something that they do not expect at all. Veronica Syvorotkina, who calls herself a master of non-standard figures, says that she once went out for a photo session together with fashion models from her agency disguised as statues.

At first, visitors paid no attention to the sculptures that Veronica and her models represented. But when they found out that the sculptures were alive they immediately wanted to touch them. Men were eager to touch the girls’ breasts. After that photo session the agency obtained huge popularity and now has many orders from customers.

Well-off people want to have live statues at events they organize. They pay $200 for two hours that a live sculpture will be standing still at a party. A group of several sculptures will go at a discount of up to $150. But it is unlikely that an entertainment agency will agree to send live sculptures for a longer period of time as it is difficult for a human to stand still for more than two hours usually.

It depends upon a client’s wish what live statues are to do. Some want live statues to act as hostess waiting for guests at the entrance; others want such statues stand still behind the curtains all the party long and just at the end of the party to suddenly reveal that they can move.

Models at Veronica’s agency use hypoallergenic make-up with cocoa butter that is safe for skin. The master has become a real professional in making-up the bodies of her models: she takes a brush to apply the make-up on all body parts including auricles.

Veronica’s agency offers another extraordinary entertainment for rich clients. They offer oligarchs to become street beggars for a certain period of time to have a taste of something absolutely extraordinary. At that, the agency makes sure that such pseudo paupers do not have conflicts with the police or real indigents wandering about streets seeking for food and money.

Rich and whimsical people no longer want regular vacations with swimming, sunbathing and sightseeing. In South Africa billionaires can enjoy hunting sharks or even risk to act as the bait themselves. Really courageous people get into a cage that is then submerged for 15 minutes. The attraction costs $80. Those who do not risk submerging may observe the unusual hunting from the board of a yacht for a smaller sum of $40. Those who are going to submerge have to sign a special document on their own responsibility for life immediately before submerging.