Rotating housing estates to be built in Moscow and St. Petersburg

Mirax Group has purchased rights from the architect David Fisher for the construction of rotating skyscrapers in Moscow and Saint Petersburg. Electricity generated by wind turbines will allow each of more than 60 floors of the tower to rotate independently. Each story will be prefabricated and then assembled on the central core, the only part to be constructed on site using traditional building techniques. David Fisher is planning to build the Green Environmental Tower, a similar rotating 68-story combination hotel, apartment and office tower, in Dubai. 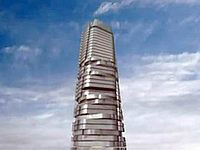 Rotating housing estates to be built in Moscow and St. Petersburg

The rotating floors will cause the building’s shape constantly change. Fisher likens the future skyscrapers to a belly dancer who keeps performing her sensuous dance. He wished that the building would “have a fourth dimension, which has no shape.”

The tower’s area is estimated to total 110 square meters. It is expected to have more than 60 stories, hosting offices and stores in the lower section and apartments in the upper part. One square meter in the apartment could cost as much as $14 thousand.

A construction site will be picked within the limits of a third transport ring of the Russian capital. A site on the territory of Moscow’s “Big City” is considered as the “most preferred” location by Mirax Group.

In view of high construction and assembly costs, experts believe the tower project will be less viable than other projects developed by Mirax Group. It is worthy of notice that such issues as water supply and sewer systems for a rotating high-rise building already offered a challenge to the Fisher team involved in the design of the rotating tower in Dubai.