People come up with most unusual ways of using cow

Those who see the cow as an animal raised primarily for its milk and meat are totally wrong. 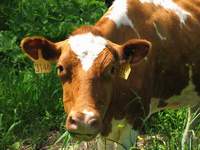 People come up with most unusual ways of using cow

No doubt about it, we should give the cow its due – it provides milk for kids, cheese for the French and steaks for the British. The ancient Egyptians worshipped the cow as a goddess. Nowadays the Hindus worship the cow too. There is no way the Hindus will ever hurt the cow. People endowed with a bit of astuteness can find most unusual ways of using the cow. Let take a look at some of the cases reported recently.

A barber from Columbia is probably the most ingenious barber of all, at least when it comes to an unorthodox approach to his trade. It is a commonplace that human hair tends to fall out from the right place while growing in the wrong ones. The barber named Ancizar Duque reportedly invented a new cure for baldness. So far the barber has already helped 200 customers grow their hair back. The barber proudly displays dramatic before and after photos of his happy customers. How did he manage to cure baldness of those men? He got a cow to lick their heads.

The cow is called Simona, and her services are much sought after by those who try to get control of their ever-widening bald spots and ever-thinning hair. Simona provides offbeat scalp treatment at a reasonable price: the full course of 12 sessions costs $55, the cost of molasses inclusive. The molasses is applied to a bald spot, which is then sprinkled with oats for the benefit of Simona. The cow’s raspy tongue seems to work well in reviving hair growth on the heads of her customers. More importantly, the method is 100% natural; it does not involve the use of any fake “wonder drugs” or questionable medical procedures.

Cow’s urine seems to sell like hot cakes in India. Bottled urine with a label that reads The Gift from the Cow costs 30 rupees a pop. The remedy is said to be capable of treating patients with diseases of the liver and those affected with obesity and skin problems. It is reportedly also used for beating cancer. Tablets and ointments made from vaporized cow’s urine are also available but hard to get because demand often exceeds supply. In India’s state of Gujarat alone, workers collect the precious medication from animals kept in more then 300 pens.

Goras Braitwait, an owner of an auto dealership from the city of Newington in Kent, Britain, is reported to have spent lots of time trying to puzzle out a way of attracting customers to his show room. Braitwait had to come up with some trick to successfully compete against other car dealers in the area. And he seems to have succeeded in his efforts. He put a life-sized model of a cow in his show room. The model is made from polymers; it reportedly looks like a live cow.

These days Braitwait’s show room is packing in crowds. Hordes of visitors come to his shop daily to take a closer look at Daisy – that is the name of the artificial bovine. Rumor has it that Braitwait is mulling over the idea of buying a real cow to replace Daisy, which was a clever investment anyway. The model already paid back 350 pounds spent on its purchase. A real animal should stir up more interest of the public, thus luring a larger number of potential customers into the show room.

An Australian politician claims that the cow is set to become a decisive factor in the national energy policy. To be more precise, manure from cows should become the principal source of electrical power, according to Senator John Cherry. Senator Cherry calls on the Australian government to allocate subsidies for developing new technologies to convert manure into biogas, which is to be converted into electricity. The senator says that farmers who raise cows would be able to save up at least 25 million pounds by cutting down on their electricity bills. Apparently, Senator Cherry did not carry out any research into the new ways of using manure prior to unveiling his brilliant plan to make electricity out of dung. He got a hint from some researchers who built a demonstration model in a large pigpen in the state of Victoria.

The senator was clearly impressed by potential project feasibility during his trip to the location. Now he has no doubts that Australia’s well-being will depend on his efforts in getting the project off the ground.