Numerous fans of professional wrestler Chris Benoit were deeply saddened and disgusted with the crime that their idol had committed. Many of them say that they will never be able to understand how he could do what he is alleged to have done. Users on Amazon.com actively debated whether or not it's appropriate to sell Benoit's "Hard Knocks" DVD. And MTV News has been flooded with e-mails from shocked fans, many of whom say they idolized Benoit but now will never be able to separate the wrestler from the man, MTV.com says. 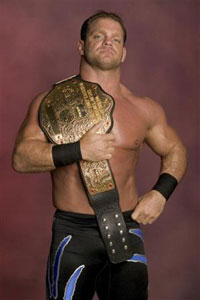 Benoit, his wife Nancy, and their seven-year-old son, Daniel, were found dead in their Atlanta home on Monday afternoon, US time.

Police believe the 40-year-old - whose nicknames included the Rabid Wolverine and the Canadian Crippler - strangled his wife and son on either Friday or Saturday and placed Bibles next to their bodies before hanging himself from a cable on his weight machine.

But in a bizarre twist, reports have surfaced that Benoit's Wikipedia page was altered to include details about his wife's death well before police knew about the crime, the AP says. About an hour later, the post was taken down by a Wikipedia moderator, who said: "Need a reliable source. Saying that his wife died is a pretty big statement, you need to back it up with something."

Then, an hour later, a second anonymous editor added more information about Benoit's no-show, saying "... which according to several pro wrestling websites is attributed to the passing of Benoit's wife, Nancy".

Police in Georgia have raided the office of Canadian professional wrestler Chris Benoit's personal physician, CTV.ca news website wrote. Officials said they were searching for records and other items in Dr. Phil Astin's office in Carrollton, near Atlanta.

Astin was a longtime friend of Benoit and said earlier this week he had been treating the Montreal-born wrestler for low testosterone levels. The condition likely originated from previous steroid use, said the doctor.

Astin would not say what, if any, medications he prescribed when Benoit visited his office last Friday - just hours before the wrestler killed his wife and son and then hanged himself at their home in Fayetteville.

Anabolic steroids were found in Benoit's home, leading officials to speculate on whether the drugs played a role in the slayings. Some experts believe steroids cause paranoia, depression and violent outbursts known as "roid rage."

In the meantime, the father of Chris Benoit says a private memorial service will be held in Canada for the professional wrestler. He did not give a date for the service and no further details were available. He said services for Benoit’s wife and son probably will be in Daytona Beach, Florida.

Investigators said Benoit's 43-year-old wife was strangled Friday with what appeared to be a cable in an upstairs family room. Her feet and wrists were bound and there was blood under her head, indicating a possible struggle. Daniel was probably killed late Saturday or early Sunday, and his body was found in his bed, District Attorney Scott Ballard said.

Ballard said the autopsy indicated that there were no bruise marks on his neck, so authorities are now assuming he could have been killed using a choke hold. "It's a process of elimination," he said.

The family was struggling before the killings with how to care for the child, who suffered from a rare medical condition called Fragile X Syndrome, an inherited form of mental retardation often accompanied by autism, said Jerry McDevitt, an attorney for World Wrestling Entertainment.

"Him and Nancy were clearly struggling about this whole issue, about how to take care of Daniel," said McDevitt.