Paris Hilton, the 26-year-old heiress of the Hilton hotel empire, who is also a singer, model, and actress, started serving her three-week prison term on Monday for violating the sentence imposed after she was caught driving while intoxicated. Dozens of flash bulbs burst into white light as Paris Hilton arrived in the women’s prison in Lynnwood, southern Los Angeles. She walked into the building without uttering a word. Hilton turned up at the MTV Movie Awards ceremony on Sunday, telling the reporters that she was “very afraid yet ready to take her punishment.” 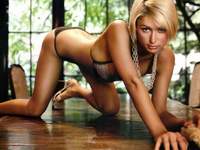 Hilton will have to swap her designer threads for an orange jumpsuit when in a penitentiary. According to Reuters, she will share her 3.5 m by 2.5 m cell with another cell mate. The cell is equipped with two-storey bunks and a lidless toilet bowl. Hilton will stay within the confines of her cell all the time save for one hour, which is allotted for taking a shower, watching TV in a recreation room and make a phone call using the facility’s land line. The inmates are not allowed to keep their cell phones while incarcerated.

“I’m trying to be strong. I’m ready to turn myself into prison though it’s pretty hard for me. I really appreciate support from my family, my friends and my numerous fans,” said Hilton, speaking to reporters several minutes before the MTV Movie Awards kicked off.

Hilton was sentenced to a prison term for violating the sentence imposed when she was caught DWI. On September 7, 2006, the police pulled over Hilton’s car for speeding. As it turned out, the celebrity party girl tested positive when she took a Breathalyzer test. She was sentenced to 3 years in prison and a $1,500 fine. Hilton got into trouble again in January 2007 when the police pulled her car over and found out she was driving on a suspended license. Finally, Hilton was detained by the police in February this year for driving with headlights switched off in the dark.

The court hearings took place in early May. Hilton arrived to a courthouse 10 minutes late, parking her black Cadillac Escalade nearby. She was sentenced to 45 days in jail by an infuriated judge. The judge also warned Hilton that her sentence would extend to 90 days should she fail to turn herself into the prison on time. Hilton’s lawyers managed to cut the punishment to 23 days on the basis of a Californian law that permits the reduction of a prison term in case a prisoner “who is deemed harmless to society” displays good behavior. Besides, Hilton will be housed in a special part of the jail away from the prying eyes of other prisoners.

A three-week stint behind bars will not only give a boost to Hilton’s publicity, it will surely make her wealthier as well, according to reports in U.S. media. Tabloids are reportedly ready to offer millions of dollars to the heiress of the Hilton hotel empire for printing her first post-jail interview. Besides, a “Hollywood studio” has already begun developing a fiction movie about the “hard days spent by Paris Hilton behind bars.”