The study says that two or three-year-old children belong to a specific age group known for extreme aggressiveness, fierceness, and cruelty

You got it wrong if you thought we were going to talk about tigers, lions, wolves, alligators, or sharks. It is really hard to guess who is the most malicious and cruelest of all species. 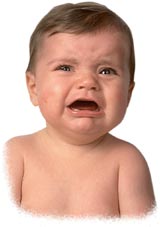 The little boy's name is Maxim. His huge brown eyes are innocent and clear as a child's eye should be. Maxim could be good or bad. When he is good, he is ready and willing to recite the ABC, he can help his mother cook kasha or he can sing a little in his angelic voice at the request of guests. But he is not simply bad when he is bad, he is just terrible. He used to scream and yell as his little fists were pounding on his mother. On one occasion he beat up a boy with a plastic fire engine toy in the kindergarten. He was reported to be pushing around, scratching, fighting, spitting etc. He would defy any authority. He would go frantic if his smallest whim happens to be disregarded. His face would turn red and purple and he would cough hysterically until he induced a bout of vomiting. The adults had the impression that two different persons were living inside the child.

The situation does not worry Maxim's young mother yet. All in all, the boy is just two and a half years old. He is going to change for the better when he grows older. However, a study conducted by Canadian researchers says that children of the same age as Maxim belong to an age group known for extreme aggressiveness, fierceness, and cruelty.

For decades aggressiveness was associated with hormones. Teenagers knocking on puberty's door were regarded as humans at the wildest and most dangerous age. It was thought that parents and teachers should concentrate on young teenagers in order to prevent the development of aggressiveness. Contrary to the above theory, new studies show that children whose age ranges from two to three years are the most “terrible” creatures. Those little boys and girls can already walk but can not control their emotions. They are driven by animal instincts. And those instincts can trigger wicked actions.

Jean Jacques Rousseau believed that all of us are born morally clean and innocent, we are like a canvas with nothing on it. Our moral character and attitudes will depend on a palette of colors to be used by the world. On the other hand, St. Augustine wrote that all children are born corrupt, and they learn how to behave themselves in society later on. Where is the truth?

Richard Trembley, a researcher at the University of Montreal, is one of the leading scientists involved in the study of the nature of aggressiveness. He would rather share the viewpoint of St. Augustine. In fact, Dr. Trembley likes to quote St. Augustine. Having conducted hundreds of various studies, Dr. Trembley arrived at the conclusion that children's aggressiveness is not a product of experience, it is an innate character trait. It is one of the rudiments of our early evolution stage when man had fight ferociously for his survival. Man learned how to keep that natural force under control. However, a human being shows the worst examples of behavior when he is small and weak i.e. during the early years of his childhood. Dr. Trembley was astounded with the conclusion he made. “I felt as though I was seeing the world in a completely different light,” said he.

“Physical aggression is not a contagious disease. It is a natural kind of behavior, and one should learn how to control it. Well, our education falls short of perfection. Our socialization resembles plywood, it is very fragile,” said Dr. Trembley in an interview to The Globe and Mail.

The fragility of a plywood socialization will crack and split into pieces when a quite and reportedly reserved teenager suddenly pulls up a pistol and starts shooting at any person who happens to be around. Dr. Trembley has never come across a case study about a passive child turning into an aggressive adult. A wrathful adult has always been a wrathful child who failed to tame his wrath.

According to Dr. Trembley's theory, there is no difference between a toddler who took a toy from his mate without asking permission, and a burglar who knocked you down after you caught him in the act of stealing your brand-new stereo system. “The behavioral pattern in both cases is the same. The point is that the gorilla has grown up a little,” says Dr. Trembley.

Dr. Trembley started his first major research in 1982. He arrived at the first conclusions ten years later. For example, he understood that almost every child at six years old is slightly more aggressive than at the age of 16. Yet aggressiveness reveals at an earlier age. Finally, Dr. Trembley had to deal with the newborn as he slid down the age scale in his research.

Dr. Trembley concentrates his studies on the social roots of aggressiveness. Needless to say, geneticists look for the biological factors. Researchers focus on frontal lobes of the brain, especially on one particular area where neuron communicators control the emotions. That area of the cerebral cortex in a human child is much more developed than that in the offspring of an animal. The Canadians discovered a link between aggressiveness and frontal lobes a long time ago. In 1848 a foreman of a railroad team was injured during the explosion in Vermont. A metal bar went into his forehead. The foreman survived but his personality changed dramatically after the accident. He was reported to have suffered from “fits of anger” and showed a “lack of respect” to everybody. People who had head injuries during an armed conflict or car crash sometimes experience similar symptoms.