Pain and sufferings in sport: High price for success

It is an open secret that the world of professional sport is cruel and risky business which can do great damage to an athlete’s health. Some sport-related injuries can be eventually treated; others can ruin an athlete’s career or even life. There are plenty of examples to choose from. 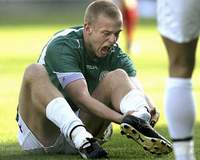 Pain and sufferings in sport: High price for success

Winning the game at any price

A talocrural joint injury often becomes a chronic health problem for very tall basketball players. And Sabonis was a very tall player. A long-legged basketball player does not even have to dislocate his foot to get the injury. Landing on somebody else’s sneaker is all it takes.

An elastic bandage was the only preventive means available at a time when Sabonis was starting his career. On the one hand, the bandage hinders blood circulation in the foot. On the other hand, it cannot secure the joint firm enough to save it from a potential injury. The so-called “tape” was invented to replace the bandage. The tape is far more effective preventive means which holds the joint in place without cutting blood circulation.

Arvidas Sabonis could have avoided the injuries which marred his career if the tape had been available in his time.

Clint Malarchuck, a goalkeeper for Buffalo Sabres, survived a near-fatal incident when a player of the opposing team slashed the goalie’s neck with his skate during a scuffle near the goal line. The skate run over the flesh just a few millimeters away from the carotid. Malarchuk somehow managed to leave the rink on his own. He was admitted to hospital on that night. But Malarchuck left hospital on the following morning. He recovered miraculously fast and resumed playing for his team in two weeks.

The incident prompted the hokey authorities to introduce a protective device for the neck of a goalie – a plastic shield hanging over the neck area.

The 31-year-old Latvian hockey player Sergei Zholtok spent a few years playing in NHL teams. He passed out while playing for one of the Riga teams. Zholtok was rush to hospital but died one hour later in an intensive care unit.

Cameroonian footballer Mark-Vivien Foyer fell unconscious to the ground while playing for his national team during the Conference Cup. The doctors tried to resuscitate him, but to no avail. Foeyr died from heart failure. He was 28.

The 24-year-old member of Hungary’s national football team collapsed during one of games he played for Bemfica. The game was suspended for fifteen minutes. The doctors did their best in a desperate attempt to resuscitate the athlete but he was pronounced dead upon arrival to a hospital.

The public is well-aware of the fact that today’s sport is closely intertwined with business. It is no longer a competitive athletic activity driven by some lofty ideals. The athletes undergo severe training sessions and do their utmost to win at a competition. At times their bodies simply cannot handle an immense amount of stress and pressure. Besides, most athletes resort to the use of performance enhancing drugs, which usually have detrimental side effects on their health.

CSKA goalkeeper Sergei Perkhun and Anzha striker had a head-on collision while fighting for an upward ball during a match in Makhachkala. The goalkeeper lost consciousness but came around later in a hospital. His condition deteriorated as the doctors were moving him to a local airport for an emergency flight to Moscow. Perkhun was brought back to the hospital where he survived a 7-minute clinical death. The player was later evacuated to Moscow.

Perkhun was diagnosed with a “complete enema of the brain” at the Burdenko Central Military Hospital. He passed away several days later.

The famous Brazilian-born striker Ronaldo sustained a grave kneeinjurywhile playingfor Inter. The media predicted an abrupt end of the player’s career yet the managers hired best specialists for the treatment of his injured knee.

However, Inter’s managers put out Ronaldo back into action prior to completion of his recovery. They apparently overruled the doctors’ opinion. As a result, Ronaldo’s knee began to literally fall apart nine minute after the player stepped in the game. The horrible incident was broadcast by many TV stations across the world. Consequently, Ronald spent another year receiving intensive treatment for his aggravated knee injury. He finally made his comeback two years later. Ronaldo demonstrated first-rate performance during the 2002 World Cup and led the Brazilian team to victory. He was named the best player of the 2002 World Cup.

Marat Izmailov was regarded as Russia’s most promising footballer for several years. He was reportedly still in his teenage years when he became one of the top players of Lokomotiv. Rumor has it that best European clubs showed lots of interest in the young player. However, his much anticipated career never happened. Izmailov was not affected by the infamous celebrity factor stemming from megalomania or anything of the kind. On the contrary, the guy fell head over heels into football, according to his colleagues. Stories emerged about Izmailov persistently driving the ball around his flip-flops on the floor in his room while the other players were either asleep or watching TV when at leisure during a training session.

It is still debatable whether a football-centered state of mind can do a player any good. Anyway, Izmailov has failed to live up to his early reputation as Russia’s most prospective young footballer.

Winners get punished too

George Best began playing for Manchester United when he was barely 17 years old. Best had been declared a football genius by the time he reached 20. He was named Europe’s best player in 1968. Many experts still consider him the most talented British footballer of all time. However, Best’s alcoholism took a heavy toll of his amazing talent and skills.

Best had been known for his drinking problem from the early days of his bright yet short career. He could be on a binge for several days even on the eve of an important game. Best was 27 when he had to quit United due to his addiction. He then spent several years playing for second-class clubs in Britain and United States. In terms of his career, Best went to the dogs. He made several attempts to kick the habit. He had to undergo surgery and have his liver transplanted. In 2005, George Best died at the age of 59.

Mike Tyson grew up in Brooklyn. Either he was born that way or the bleak environment played a role in shaping his character, Mike has always been a very aggressive kid. Mike’s aggressiveness in combination with his excellent physical potential made him one of the world’s best heavyweight boxers of modern times.

As he climbed to the top of the boxing world, Tyson made use of his inimitable aggressive style to quickly overpower opponents in his best fights. However, Tyson went out of hand after he became increasingly addicted to illicit drugs. Cuss D’Amato, Tyson’s coach and godfather, parted company with the boxer. Things went from bad to worse. Tyson was tried and convicted for rape. Having served his prison term, Tyson tried to regain his former status in the world of professional boxing. But he was unable to get into shape to match up his innate aggressiveness. On June 28, 1997, an infamous incident occurred during a rematch against Evander Holyfield. In the third round of the fight Tyson flipped his lid and bit Holyfield on the ear, removing part of the earlobe. The Bite Fight seemed to deal a final blow to Tyson’s career in the professional boxing.