Russia takes the first place in the world as far as the amount of smokers per capita is concerned, Deputy Head of the Duma's Health and Safety Committee said Wednesday. Nikolai Gerasimenko, an academic with the Russian Academy of Medical Sciences, said that Russia also leads the world in terms of underage smoking , and that it is the third-largest maker of tobacco products after China and the U.S. 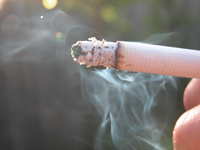 “The death rate caused by smoking has grown up from 250 thousand to 400 thousand people over the past ten years”, - Gerasimenko said. He also noted that smoking is one of the main causes of the demographic crisis in Russia, because smoking kills about 700 Russians everyday.

Gerasimenko said that such a high death rate was caused with higher levels of tar and nicotine contained in Russian cigarettes (the level may increase the standard by up to 60 percent). More than a half of Russian teenagers smoke, he said, with boys outnumbering girls 60 percent to 40 percent. He said the low cost of cigarettes in Russia was a major contributing factor to the trend, Ria Novosti reports.

He also lamented the ineffectiveness of anti-smoking legislation passed in 2001, adding that Russia remains the only major country in the world not to have signed on to the World Health Organization's (WHO) anti-smoking convention.

"The convention places serious limits on tobacco producers and their profits," Gerasimenko said, "whereas Russia has created the most conducive environment possible for tobacco companies." No other country in the world taxes cigarettes at such a low rate, he said.

One hundred and seventy-two countries have signed the convention , he said, whereas those that have not include Zimbabwe, Guatemala, Russia and several others.

Based on the materials of Russian news agencies