Fairy tales about a knight in shining armor, the one who is waiting for you somewhere across the sea, has always been very popular with girls, especially Russian girls. However, there are different fairy tales featuring different knights. Problems arising from those fairy tales differ too. In short, there are plenty of examples to choose from. A foreign affair has its pros and cons, by and large. 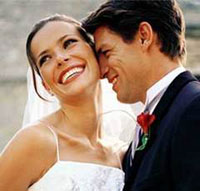 In this case a woman deliberately seeks a foreign companion for marriage. She can use a large variety of web sites which can provide all the necessary information on a potential candidate for matrimonial bliss.

There are agencies specialized in searching for overseas bridegrooms. Please be advised that you will have to cough up a handsome sum for services rendered by the agencies, whereas there is no guarantee whatsoever that they will find you a perfect match. At times paid matchmaking is a success.

Most attempts to find somewhat decent via the Internet are doomed to failure and disappointment. For instance, a foreigner who sends you charming messages and looks like a Hollywood stud on the photo attached to his web page is likely to turn into a nondescript type with a potbelly and inflamed ego if you ever get a chance to see him in the flesh. Seeking mates on the Internet is a lottery with prizes given away to a handful of winners.

Some foreign rednecks still believe in the stereotype about a Russian woman in dire strait, the one who is ready and willing to flee her motherland at all costs. The stereotype is obsolete and should be discarded.

Chances to meet someone good and worthwhile are higher if encounters occur impromptu. You can meet a foreign man of the same walk of life at a corporate party, workshop, conference or business trip. Aside from being in the same trade, two people may find other interests to share. The aforementioned friends of mine (those who have been happily married to foreigners for quite a while) met their future husbands while “in the line of duty”: one of them worked in an embassy abroad and the other one worked for a foreign company. Thereby hangs a question: what country would be the best place for you to live if you have a prolonged relationship with a foreigner?

The option seems to be quite possible provided that your foreign partner has a working command of Russian and stands a good chance of finding a decent job in this country. It is unlikely that your partner will take you to his land if he is “enchanted” by Russia. Foreigners often admit that living in Russia is not as boring as it is in their countries. The statement is quite true.

Life will be easier for you in this case. In a variety of ways, your partner intends to be a longtime guest of Russia. Consequently, he will have to play by the book written in Russian.

In his country of residence

You will have to adjust yourself to life in a foreign land in this case. There will be no friends or loved ones to lean upon when times get rough. You will be faced with a new environment and a great deal of novelty, which you will have to get used to in one way or another. However, the option may be your cup of tea if you grew tired of living in this country and look forward to moving somewhere else.

The above refers to a relationship involving two people living together. It is a different picture when distance lends enchantment to the view. In other words, there are thousands of miles between the two people who are in love with each other or so they say. Needless to say, stars collide and fall out of the sky when those two meet twice a year. They have sex that defies imagination. It is understood that they do their best to make the most of the day because the next one will come in a six months’ time. In the end, the long-distance lovers will feel weary of this kind of relationship. Romance is a wonderful thing, no doubt about it. But things look somewhat weird if you have to wait six months until another opportunity to see your inamorato comes along.

Over the last several years things have improved in Russia when it comes to the study of foreign languages. The number of people who have spoken command of English is a lot higher that it used to be. Your partner may speak Russian too if you are in luck. Yet, certain nuances relating to a foreign language or social and cultural realities of a different country are still hard to comprehend, by and large.

Social being determines consciousness, as Karl Marx put it years ago. But the rule is still in effect. One cannot disregard certain traits of the national character pertinent to one people or another. The Germans are known for the pragmatism and pedantry. The French are thought to be a nation of misers. Some Japanese ways and customs seem to be highly exotic or even incomprehensible to Europeans. The attitudes of Arab males toward the role of a woman rest on Islamic doctrines. The list is far from being complete.

Anyway, a relationship with a foreigner will enable you to make a number interesting discoveries no matter how it is going to evolve or how it is going to play out. You will learn new words and get some hands-on experience regarding cultural, psychological and sexual realities.