Russia eternally protected from powerful hurricanes like Katrina and Rita

According to preliminary estimates, Rita's damage may total from $2.5 billion to $18 billion

The horrible Hurricane Rita weakened in the beginning of the past weekend as it hit the US Gulf Coast on Saturday downgraded to a tropical storm. The storm ravaged Texas, Louisiana and Arkansas with pouring rains and strong winds. 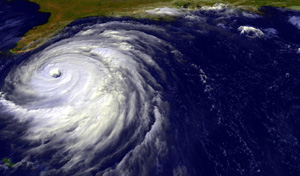 US insurance companies are currently calculating the damage caused by the monstrous hurricane. According to preliminary estimates, Rita's damage may total from $2.5 billion to $18 billion. Experts believe that despair is not that serious and is evaluated at $5 billion maximum. Specialists from AIR Worldwide Corp. say that the hurricane left large industrial centers in Texas and Louisiana intact. Indeed, unlike the destructive Katrina, Rita was swirling above little-populated areas of the USA and did not strike any city.

Forecasters say, however, that Rita may not be the last hurricane to devastate the US Gulf Coast before the end of the season. Thirteen storms have hit the USA so far this year: meteorologists say that it is an absolute record in recent times. The year 1933 was a lot more terrible at this point, when there were 21 storms registered. However, it is the first time in history when the USA suffered from such powerful storms as Katrina and Rita within only one month.

According to meteorological forecasts, the USA may possibly suffer from other powerful storms during the remaining two months of the season. US specialists already say that they are running out of names for frequent hurricanes and storms.

The USA is not the only state, which suffered considerable financial and human losses as a result of natural disasters in September. The director of the Russian Meteorological Center, Roman Vilfand believes, however, that devastating hurricanes and storms will never hit Russia. The specialist said that the vast territory of Russia, except for the Far Eastern coast, will never suffer from any storms the power of which could be similar to Katrina or Rita hurricanes in the USA.

”Tropical cyclones may occur only in the Far East of Russia. As a rule, they hit Kamchatka and Sakhalin, but there are no hurricanes on the rest of Russia's territory,” Roman Vilfand said. As a rule, most dangerous weather phenomena take place during winter seasons in Russia. However, even strongest snowfalls, snowdrifts and snowstorms pale in comparison with the power of tropical storms and typhoons. In addition, “winter is a lot safer than summer, for there cannot be floods, and weather forecasts are a lot more accurate in winter than in summer,” the head of the Russian Meteorological Center said.

Russia is seemingly protected against any type of extreme weather conditions for the forthcoming several years. Specialists say that there will be no meteorological or economic disasters in Russia during the coming three years. Experts do not predict either an oil crisis, the ruble devaluation or the reduction of the industrial output and the population income.