The skull of a large carnivorous dinosaur and the tusk of a shaggy-coated mammoth from the Ice Age sold for a combined $372,000 at a natural history auction Sunday, auction officials said. 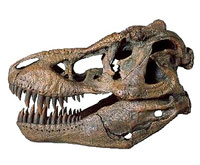 The auction, which also featured a meteorite and other items, brought in a total of $1.55 million.

The prepped and mounted 32-inch-long tyrannosaurus skull was sold to an anonymous California collector for $276,000, the third-highest amount paid for a prehistoric specimen at auction, said Darryl Pitt, the meteorite expert for Chait.

The highest ever paid was $8.36 million for the skeleton of a 65-million-year-old dinosaur named Sue in 1997, Pitt said.

The 10-foot tusk of a woolly mammoth found on the Siberian tundra was sold to an anonymous telephone bidder for $96,000, the most such an item has commanded at auction, Pitt said.

Other select lots include:

Egyptian Mummy Hand - The mummification indicates a possible date between the New Kingdom and the Ptolemaic period.

Piece of the Planet Mars - An extraordinarily rare specimen.