The filming of the new movie starts in September

Movie star Angelina Jolie, who is rumored to be pregnant with Brad Pitt's child, is ready to play a part in another epic film after Alexander, this time Beowulf, The Guardian says. The title of the new film suggests that the motion picture is based on the Old English poem, which is thought to have been written by unknown author, probably an English monk, between the 7th and the 10th centuries. 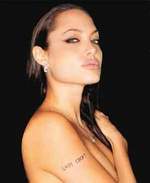 The movie, which will be funded by American billionaire Steve Bing, is directed by Robert Zemeckis. British actor Ray Winstone will play the part of Beowulf. According to the poem, the hero kills the man-eating monster Grendel and then descends to the underwater adobe to kill the monster's mother too. Beowulf becomes a prosperous king afterwards and reigns for 50 years, until he is being slain by a dragon. The poem ends with the scene of Beowulf's funeral. Beowulf possessed incredible physical strength, which was equivalent to the power of 30 men.

The filming of the new movie starts in September. The film crew will use the stop-motion technology, meaning the cast will have to act in studios, whereas all special effects will be added afterwards. Also starring are Anthony Hopkins and Brendan Gleeson. The film is said to become extremely popular with those cinema-goers, who enjoy the fantasy genre. The forthcoming success of Beowulf will let it stand in the same line with legendary The Lord of the Rings trilogy.

For the time being, it is not known, which part Angelina Jolie will play in the new epic saga. The female characters in the original poem include a monster, Grendel's mother, and gracious queens. Jolie may play the part of Great Queen Modthryth, a woman who would torture and kill by the sword any man who dared to look at her. Roger Avary, the scriptwriter of the movie, will probably think of another, more attractive part for Ms. Jolie.