Natalia Vodianova sick and tired of fashion, determined to switch to Hollywood films

Russian supermodel Natalia Vodianova turns 25 on February 28. A correspondent of Express Gazeta went to the city of Nizhni Novgorod to speak with Vodianova’s mother, grandmother and grandfather. The loved ones shared with the correspondent some stories about the model’s past. They also unveiled some of her plans unrelated to modeling. 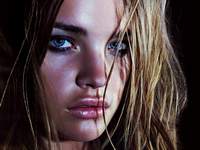 Natalia Vodianova sick and tired of fashion, determined to switch to Hollywood films

“I often hear people say about my daughter: ‘She happened to be in the right place at the right time.’ No doubt about that, we can’t underestimate the role of a stroke of luck in my girl’s story. But I’m also pretty sure that God has rewarded Natasha for her patience and kindness. I’ve never seen her being mad at people. I’ve never heard her shouting profanities and insults at anybody. On the other hand, Natasha owes her success to her own effort,” said Larisa, Vodianova’s mother.

Natalia Vodianova’s schedule was usually full from morning till night. She was attending numerous casting sessions including those selecting models of a different type.

“The French pretended they couldn’t understand not a word in English, therefore my daughter had learn to speak French pretty fast,” said Larisa. “She could only utter ‘I can’t understand you, please speak slowly’ at the beginning”.

The Russian girl from Nizhni Novgorod scored her first triumph at an haute couture week in New York shortly after coming to the U.S. for the first time. Her appearance on the catwalk was an instant success. “Where did this beauty come from?” the fashion industry people would ask one another. Before long the Russian beauty got tons of offers from such iconic brands as Gucci, Calvin Klein, Ives Saint-Laurent…

Natasha met his future husband at one of the private parties. Owners of model agencies like to display their models to wealthy men. Young Lord Justin Portman was reportedly dreaming of meeting Vodianova. But the Russian model was not impressed at all when she took a few glances at the offspring of one of Britain’s oldest blue-blooded families. Besides, the nobleman apparently had too much of a drink at the party. Portman was nervously cruising around for quite awhile, he even started flirting with Natasha’s girlfriend. “Natasha told him to beat it when he finally came up to her at that party. She also told him that a husband was waiting for her in Russia. There was that guy called Serezha in our town. The two of them had been dating before she signed her first contract and moved to France. They even had plans for the future. But those plans never became a reality,” said Natalia’s mother.

“Well, Justin got pretty angry at her that night. He even told her something gross. Natasha went: ‘Why don’t you get lost right now? Who do you think you are?’ Justin showed up the next day at Natasha’s agency, carrying a huge bouquet of roses,” adds Larisa.

Natasha got scared when she found out about her pregnancy. She had no idea how her employers would react to the news. The employers told her to relax and keep working at her own discretion. Vodianova took her maternity leave just weeks before she gave birth to her first child.

Natasha had a frightening experience a few weeks before she became a mother. She and her husband were in New York on September11, 2001. A horrible soundawokethem that morning. Their apartment was located in the vicinity of WTC towers attacked by the terrorists. Soon after the second plane hit the towers, Justin just picked up his wife in his arms and darted out of the house.

“Natasha insisted that Lucas, their firstborn, be baptized in accordance with the Russian Orthodox Church rite,” said Larisa, Natasha’s grandmother. “The baby was baptized Alexander. Soon after that Justin converted to orthodoxy too. Natasha and Justin wanted to have a church wedding ceremony, but they couldn’t get permission. So he became a member of the Russian Orthodox Church. The wedding was held in St. Petersburg in September 2002,” added the grandmother.

Vodianova quickly regained her shape after childbirth. She resumed modeling for the big-name companies. Today she is ranked one of the wealthiest models of the fashion industry. She is even wealthier than her husband, Lord Portman, who is ranked No 5 on the list of Britain’s richest people. The Russian Cinderella was also introduced to the British Queen, Elizabeth II. The Queen reportedly complimented Lord Portman on his choice. The Queen was said to have been delighted at the refined manners of the Russian beauty.

The couple’s second child, Neva, was born in March last year. On that occasion, Lady Martha, Justin’s mother, insisted that her granddaughter be baptized a Lutheran. The baptism took place on a sunny spring afternoon in May. The ceremony was held in an old castle near London. The castle is one of the few owned by the Portmans. It dates back to 1212.

Needless to say, Neva is far too small to appreciate the fact that she was born into a family of the British nobleman and one of the world’s most beautiful women. The six-year-old Lucas seems to be aware of the circumstance. “The boy is full of fun. Once Natasha was about to send him aboard an airplane on his own, you know, under the care and supervision of a flight attendant. Natasha just couldn’t help asking him: ‘Listen to me, Lucas. Why don’t you take a nanny along?’ And the boy went: ‘Mommy!? What are you talking about? People may take me wrong!’” said the grandmother with smile.

Vodianova quit walking the catwalk a long time ago. But she is still working for some big brands. “Her contract with L’Oreal recently expired. She didn’t want to extend it. I believe she didn’t like working for that company very much. Natasha signed a new contract with Chanel. Maybe it’s her last job with the model business,” said her mother.

According to Vodianova’s mother, Natasha no longer takes pleasure in modeling or making money in the process. “I’m awfully tired. Sometimes I feel like I’ll have to take a few years off to fully recover. I feel like pulling the plug on modeling,” reads a line from a letter sent by Natasha to her mom. “I guess she’s going to retire soon. All and all, Natasha believes it’s time for her to take a degree; she is very interested in psychology. But right now she’s into movies. She is taking acting lessons; she can afford the best teachers. She dreams about making a career in Hollywood. And you won’t see her name on the silver screen. She’s going to take a stage name if she succeeds in her acting ambition,” said Vodianova’s mother.