Men's jealousy is different from that of women. Women usually get jealous if they feel their partner's infidelity. Men are clearer: they do so when they see any signs of adultery. Psychologists find the reasons for this difference in the evolution of mankind. 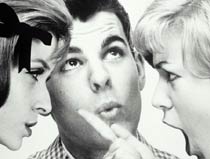 Women notice what their partners starts to feel for another woman in the first place. Men are more likely to react to woman's adultery. Psychologists from the University of Bilefeld (Germany), who conducted research with 206 volunteers, think that origins of jealousy can be traced back to the earliest period of history. And the effects of this are still present today.

During the experiment participants had to choose the most “unbearable” situations out of those that were suggested to them. Women considered the situation to be “unbearable” when there were signs of emotional infidelity. For men it was harder if a woman had a lover.

“This can be explained by the fact that men's sexual infidelity does not effect negatively the reproductive function of women”, scientist Achim Shьtzwohl thinks. – “It doesn't matter for women. However, during the earliest period of evolution if a man didn't take care of his woman and children this could lead to their death.”

Unconscious mechanisms of fear still continue to exist. “As far as a man is concerned the evolutional situation looks absolutely different. It is important that his partner is faithful to him,” – Shutzwohl says - “in the sense that he must be sure that he's the father of her children. A man was always afraid of putting much energy into the younger generation which could turn out to be some other man's offspring.”