Lauren Nelson, an aspiring Broadway star, was crowned Miss America on Monday night, the second year in a row that a Miss Oklahoma has won the crown. 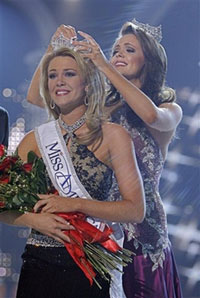 Nelson, 20, of Lawton, Okla., is a student at the University of Central Oklahoma and wants to get her master's degree in musical theater.

Nelson was crowned by last year's winner, Jennifer Berry. Nelson, a blonde who told judges she wishes she was taller, sang "You'll Be In My Heart" in the talent competition and plans to promote protecting children online during her yearlong reign as Miss America.

She gets a $50,000 scholarship with the crown and stands to make thousands more in appearance fees, the AP reports.

Mario Lopez, of "Dancing with the Stars" and "Saved by the Bell," hosted the show, which marked its second year at the Aladdin Resort and Casino on the Las Vegas Strip.

The pageant moved from Atlantic City, N.J., last year in an attempt breathe new life into an institution that had fallen far from the forefront of American pop culture.

Producers took cues from "American Idol" and incorporated interviews with judges and text-message voting after the swimsuit, talent and evening-gown competitions, kesq.com says.