Borat becomes a fly in the ointment for Golden Globes Awards

As the 64th annual Golden Globes unfolded on Monday, " Babel " won the award for best dramatic movie. And Martin Scorsese won for directing "The Departed," while "Dreamgirls" scooped up awards for best comedy/musical and for a pair of its actors — keeping the films in tight competition for top honors in the Hollywood awards race. 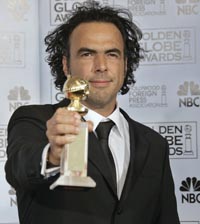 Borat becomes a fly in the ointment for Golden Globes Awards

In a rather remarkable feat, Helen Mirren won best actress awards for playing two Queen Elizabeths: one for the television mini-series "Elizabeth I" and the second for portraying Elizabeth II in the film "The Queen."

Still, the evening's real significance lay in the ritual: Hollywood's first big awards party of the year was under way.

No film truly dominated the affair. Jennifer Hudson, a newcomer, won for best supporting actress in a motion picture for playing a determined but less-than-svelte singer in "Dreamgirls," while the longtime Hollywood star Eddie Murphy — himself a newcomer to awards glory — won best supporting actor as a singer on the decline.

Dozens of television and movie stars braving unusually chilly temperatures made their way along 30,000 square feet of red carpet, the longest such artifact in the awards world, and were greeted by approximately 1,500 credentialed journalists, who could well have matched the number of guests at the event.

Following the event, celebrities, their guests and anyone who could find a way in were scheduled to attend at least seven parties, including two off-site. The physical feat of accommodating so many people can lead to extraordinary measures: HBO had work crews build a floor over the pool at the Beverly Hilton Hotel to accommodate the crowd.

The timing of the Globes — right after Oscar nomination ballots have been returned, but before those results are announced — makes for a significant stirring of the awards season tea leaves, iht.com reports.

Sacha Baron Cohen received the Globe for best actor in a movie musical or comedy for his raucous satire "Borat: Cultural Learnings of America for Make Benefit Glorious Nation of Kazakhstan."

As Pravda.ru Previously reported Russian officials banned the showing of controversial comedy film “Borat” in cinemas across the country. The film, which supposedly takes a deep look into US culture to the benefit of Kazakhstan, a republic of the former Soviet Union, is a satirical piece of work describing customs and traditions of the Asian country. In Russia, the film will be released only on DVD.

In colorful anatomical language, Cohen thanked co-star Kenneth Davitian for a naked-wrestling scene the heavyset hairy actor rolls around on top of Cohen, who has to breathe the fetid air from his buttocks.

Meryl Streep won her sixth Golden Globe, this one as best actress in a musical or comedy for "The Devil Wears Prada," in which she plays the boss from hell at a top fashion magazine.

The talking-auto comedy "Cars" took the first-ever Golden Globe for animated film, a category added because of the rush of cartoon flicks Hollywood now churns out, the AP reports.