Human beings turn into vampires due to a genetic flaw

Vampires are very popular when it comes to fiction. There are numerous movies featuring vampires, including a few Russian-made flicks e.g. Night Watch and its sequels released over the last few years. Are vampires just fiction? According to some ostensibly serious researchers, there is not smoke without fire. They believe that all the bloodsucker stories in the modern-age movies were concocted from the original ingredients dating back to the Middle Ages. In other words, the vampires have existed and still exist in our time. 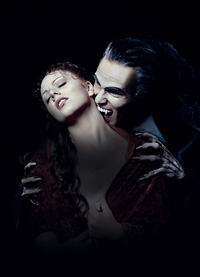 Human beings turn into vampires due to a genetic flaw

The number of vampires could have grown in a geometric progression

Kostas Eftimiou, a professor of physics at the University of Central Florida , claims to have proven that vampires are mathematically impossible. He believes that the existence of vampires is in complete contradiction to the laws of mathematics. As by popular beliefs, once bitten is forever smitten. A person bitten by a vampire is thought to become one and starts sucking blood of other people. So what? The point is that vampires are supposed to multiply in a geometric progression if the concept holds any water.

Prof. Eftimiou recently conducted calculations on the assumption that the first vampire came into being in 1600 at a time when the Earth’s population totaled about 600 million. The original vampire bit his first victim, which bit another one, and thus triggered a chain reaction of sorts. Eftimiou’s calculations indicate that the whole world would have been populated by vampires within two years; everybody would have gone for the jugular had the scenario proved correct. Yet nothing of the above took place in reality. Therefore, there is no such thing as vampires.

Meanwhile, the police arrested a young man in the village of Novomosvovski of the Kaliningrad region, Russia . The man is believed to have stabbed an elderly woman and started licking blood that poured from the wound, Interfax reports.

According to the BBC, the 17-year-old British national Mathew Hardman stabbed his neighbor to death and drank her blood to become immortal. Manuela and Daniel Rudha, a married pair from Germany, are reported to have killed a man and drank his blood up. Daniel sharpened his incisors for cutting the blood vessels more effectively, while Manuela’s teeth were equipped with custom-made crowns that were shaped like fangs for the same purposes.

The media report on similar stories on a regular basis. Does it mean that vampires really exist?

“The individuals cited in the reports are not by any means vampires. All of them are crazy freaks, the so-called ‘Satanists’,” said Sergei Vasilyev, Candidate of Medical Sciences. They drank human blood while performing some kind of a ritual. We shouldn’t confuse them with truly sick persons who have always been and still are around. The legendary vampires of the past must have been modeled on those sick ones,” added Vasilyev.

The first vampire stories emerged about one thousand years ago. There were hordes of vampires in the Middle Ages or so it seems. Dozens of them were caught and burned alive just like witches during the Inquisition time.

There are numerous treatises penned by the members of the Holy Office with regard to the vampires’ description. The creatures were believed to come alive at night and leave their graves to suck the blood of sleeping persons. They were portrayed as detestable wild-eyed creatures afraid of daylight; a typical vampire was thought to have horrible canine teeth and a fear of daylight.

Lee Eallis, a British physician, is the first researcher who attemptedto look into the subject of vampirism from the scientific point of view. He came up with a theory that linked the so-called vampires with porphyria, one of a group of rare inherited disorders due to disturbance of the metabolism of the breakdown product of the red blood pigment hemoglobin. In 1963, Eallis submitted his monograph titled On Porphyria and Etymology of Vampires to the Royal Society of Medicine. However, his work was largely ignored by the members of the society. Professor Wayne Tikkanen, a colleague of Eallis’, unearthed the theory in the mid-1980s. Not unlike Eallis, he began to maintain that “all European myths of vampires were based on solid grounds.” But what are those grounds, after all?

Poison under the skin

Scientists believe porphyria is an inherited disease caused by some genetic flaw which affects the subcutaneous pigments.

Every living thing has porphyrins, the pigments derived from porhin, a complex nitrogen-containing ring structure and parent compound of the porphyrins. The porphyrins make part of chlorophyll, which paints the leaves green, and hemoglobin, a substance responsible for the color of the red blood cells. A disruption of the genetic program leads to disturbance of the metabolism of porphyrins. As a result, they accumulate beneath the skin. Consequently, sensitivity of the skin to sunlight changes and hence the porphyrins become catalysts in the conversion of common oxygen into the so-called singlet oxygen. The latter causes damage to the cells.

“The face of a patient affected by porphyria at its late stages is badly deformed; his extremities become bent out of shape. By and large, he is a terrifying sight to look at,” said Sergei Vasilyev. “His complexion grows darker as his gums erode making the incisors look more protruding. The color of his incisors has a sinister blood-red hue in it so the teeth look as if they’ve been stained with blood. Besides, persons who suffer from porphyria are afraid of sunlight, which causes chronic inflammation and blistering. Therefore, they tend to leave their houses only at night. Mental disturbances follow in most cases…” added Vasilyev.

According to some scientists, a bad case of porphyria may have prompted the sufferer to seek other person’s blood to temporarily alleviate the suffering. How could the sufferer get hold of the human blood in the Middle Ages? Numerous vampire stories contain a detailed description of the method. A person’s lust for blood is overwhelming; his self-preservation instincts turn him into a vampire. The rest belongs to myths and legends embellished with all kinds of bloodcurdling detailed.

“Porphyria is still one of the most mysterious diseases of our time,” said Vasilyev. Doctors hold out some hope of the genetic methods currently in the works. In the meantime, blood transfusion is widely used for treatment of the disorder. However, blood transfusion proves ineffective in the most severe cases of porphyria. Fortunately, the total number of the terminally ill patients diagnosed with porphyria around the globe is fairly small, around one hundred cases on record,” said Vasilyev.

Hennelora Kohl, the wife of the former German chancellor Helmut Kohl, was rumored to have suffered from an incurable case of porphyria. Her pains caused by sunlight were unbearable; she had to stay in most of her time. Finally, she took her own life on July 5th, 2001 .