Freeganism: eat from a dumpster is pink of fashion

Some thirty years ago the Soviet propaganda would paint horrifying pictures with regard to the “decay of the West” where the poor people had to forage through dumpsters for food. These days the propaganda clichés must be defunct. However, the number of Americans who get free food by pulling it intentionally out of the trash has been on the increase over the last several years. Those fellows are not homeless or mentally ill. They are freegans. 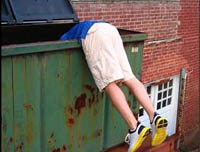 Freeganism: eat from a dumpster is pink of fashion

To many, a dump site is just a place where garbage and other worthless material are deposited. The place normally looks ugly and untidy so just a few people dare scavenger for useful material in the dumpsters, not to mention foraging them for food. Searching for food in the garbage is considered a practice appropriate for those who bottomed out e.g. the homeless, alcoholics, and beggars.

Reports on dump realities in this country are broadcast from time to time by Russian TV. The viewers can see dirty creatures crawling about the heaps of trash, searching for useful things e.g. wearable clothing or space parts made of non-ferrous metals. Female reporters with pretty faces speak for the benefit of the cameras that some of the scavengers made a fortune by foraging.

Pass your meal around if you haven’t finished it off

The situation seems entirely different in the United States . No doubt about, America has its own bums and the homeless who would not mind checking out the nearest dumpster. In the meantime, an increasingly large number of young and well-heeled Americans with top jobs and nice apartments choose to get their food for dinner from the garbage instead of buying it in a supermarket. It is obvious that their well-being has nothing to do an eerie practice. The young and successful advocates of an “anti-consumeristic ethic about eating” forage the dumpsters for food for ideological reasons, so to speak.

Freeganism originated in America at the turn of the 21st century. “Freegan” is a portmanteau of free and vegan. It is derived from the observation that even a vegan lifestyle is not free of exploitation. In fact, the original freeganism was one of the most radical forms of vegetarianism.

Vegetarians abstain from eating, wearing and using animal skins, flesh, secretions and animal-tested products. The freegans stuck to a vegan diet too yet they made use of a small loophole by saying that meat products could be consumed provided that they were obtained for free.

Eventually, freeganism split from vegetarianism and became an independent social movement. Aside from getting food out of the trash, freegans began foraging the dump site for clothing, household items and other basic things. The reason why freegans get food by pulling it out of the trash, a practice commonly dubbed dumpster diving, is not related to a lack of cash in their pockets. To many freegans, freeganism is a lifestyle, a philosophy of sorts.

Some experts in the West’s economy have been raising the alarm for a long time now. Estimates indicate that from 27 to 50% of all foodstuffs on the U.S. market end up in the garbage. Besides, the foodstuffs are often quite edible i.e. not expired. For example, an entire container of tomatoes is most likely to be discarded if a small number if tomatoes are found rotten because throwing away the whole lot is cheaper than hiring a worker to sort out the produce, from the point of view of a company.

Most freegans are educated young leftists who believe that wasting away millions of tons of edible food is a crime under the circumstances when millions die from hunger in the developing nations. Those freegans take action in an attempt to prove that capitalism is a corrupt system. They seem to be striving to point out the importance of being thrifty tosociety bydiving dumpsters.

The number of freegans is rising rapidly in the U.S. According to accounts of some Russian immigrants based in New York , journalists are lining up to interview the movement’s leaders. Several TV crews and journalists are regularly given a free tour around the dumpsters by two or three freegans performing the duties of “expert guides” on location.

One should not be under the impression that Western freegans follow suit of the Russian homeless who scavenger heaps of trash in search of something edible. American freegans find their food in the garbage of restaurants, grocery stores and other food-related industries.

As a rule, the staff at the above establishments neatly packs foods (those with critical expiry date or in slightly damaged packaging) in clean plastic bags and places them into clean backstreet dumpsters at night. Freegans come out of the dark to pick up the food without fail. Most foods are reportedly are pretty edible and can be used for a decent dinner. Freegans unload the stuff into their backpacks and go home to cook their late-night meals. The only difference between the foods from the dumpsters and those bought at a supermarket is the cost of them. The foods pulled out of the trash are free of charge.

It is noteworthy that freegans show lots of sympathy toward the like-minded souls. Freegans post useful and detailed instructions on www.freegan.info as to ways of telling the good stuff from the bad one and other valuable safety tips with regard to food found in the dumpsters.

New York-based freegans are even more fortunate. There are detailed instructions posted on the above web site regarding the timetable of the most “savory” dump site in the city. Freegans can take advice on dumpsters recommended for the aficionados of exotic cuisine or disposal times concerning leftover bags deposited near one of the city’s trendiest restaurant etc. The tips posted on the Internet are something akin to gastronomic guidelines for the dumpster divers.

In short, it is pretty safe and comfortable to get food from the trash in a civilized world. Some of the Russian immigrants are said to dive the dumpsters too. But the reason why they get their food for free has nothing to do with some lofty antiglobalistic ideals. They simply follow the practice to save up.

“The Mind’s Unable to Fathom Russia …”

It seems unlikely that the practices associated with the Western freeganism will reach the Russian shores soon. The prediction is not based on a shortage of those who are strongly opposed to consumerist society. The reason is much banal, by and large. The Russian dumpsters do not look so appetizing in most cases.

Owners of supermarkets and restaurants in Russia do not order their staff to pack expired foodstuffs into clean bags and place them near the dumpsters. They do not want to scare off respectable clientele. Owners prefer to let the foods rot away without allowing anybody to make use of it. The above scenario is not the worst and most typical one.

At times Russian stores keep marketing expired foodstuffs to make more profits. The policy is based on the notion that a smart customer will not buy a bad product anyway as opposed to a stupid fellow who should get what he deserves.

The management also use discount prices as a sure way for selling off expired foods. In other words, a civilized variety of capitalism is yet to come to Russia . Meanwhile, those who fancy a bit of something tasty from the dumpster had better go to America . U.S. freegans seem to have plenty of food to share.