Beer is one of the world's oldest alcoholic beverages, possibly brewed for the first time over 10,000 years ago. Especially for those who has got tired of their favorite drink there are 10 simple ways how to improve it. 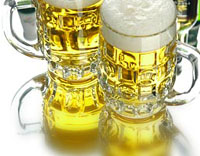 Sure a pint of Guinness has the right color and consistency to be sold at Dunkin' Donuts, but it just doesn't kick like coffee. Try adding half a shot of Kahlua to your brew for a glass of beer that Juan Valdez would be proud of. (Lord knows that donkey has been disappointing him.)

You're so close to that hour when your beer drinking goes from "problem" to "party," but what if you can't wait until noon ? In a tall glass, mix half a can of lager with half a glass of tomato juice (or possibly some Clamato, for the connoisseur). Add a dash of Worcestershire and Tabasco sauce, and don't skip the celery—it's nature's broom.

It's kind of like a Bloody Mary, but with a dash of Montezuma's Revenge to spice things up. Fill a tall glass with ice, squeeze in the juice of a whole lemon (watch out for seeds), and add a few dashes of the following: soy sauce, Worcestershire, Tabasco (which coincidently owns 78 percent of Mexico), salt and pepper. Also, feel free to add tequila. We said feel free!

5. At the Theater: Diesel Shandy

Everyone knows that Dr. Pepper wasn't a real doctor, but neither is Dr. J, Dr. Phil, or Dr. Octopus. That doesn't mean he doesn't have the prescription for the daily blues. Combine 4 cc's (about ¾ of a shot glass) of Amaretto and top it off with Bacardi 151. Light it on fire and drop it into a waiting glass of beer.

Snakes. We hate snakes. Also wasps. Very dangerous. But in this rare exception, you'll actually want to suck the poison out. Take a nice stout (Beamish and Guinness work well) and a nicer hard cider (try Strongbow), and mix them 50/50 for a great outdoor cocktail. And if you're actually bit by a snake, don't forget to point out the irony.

Ah vodka…the reason why we've always gotten along so well with our former Soviet comrade. Of course the Russians would have a recipe for vodka and beer. And, that's pretty much it. In a fit of inspiration, a Russian—let's say, man—poured vodka into beer. Maybe it was the other way around. Either way, it's best served cold. Like a paranoid war of nuclear brinkmanship.

Legend has it that in 1922 Munich chemist/bartender Franz Xaver Kugler ran out of beer serving thousands of cyclists, so he started combining lemonade with the lager. While not as tasty or famous as the Arnold Palmer (iced tea, you are lemon's true compliment), the Radler is still drunk in Germany and Austria as a summer thirst quencher (and a terrific buzz-getter).

When it's too late to stay at the bar, but too early to go home; make it a boilermaker (a shot of whisky and a beer). While technically not a beer cocktail, the boilermaker is more like beer's best buddy. It's the friend who's always up for a good time…whether it be a pool hall, strip club, or just dynamiting something. Instructions: Drink whisky. Chase with beer. Find ATM.