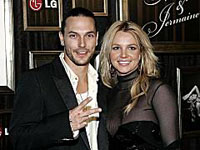 Rumors had swirled for months that the marriage between the pop princess and aspiring rap artist had turned rocky, but Spears said nothing in her Monday evening appearance on "The Late Show with David Letterman" to suggest that divorce was imminent.

Observers noted, however, she was not wearing her wedding ring and celebrity magazines reported Tuesday that Spears was a no-show at a New York launch party last week for Federline's first album "Playing With Fire", Reuters reports.

In the divorce papers, which do not mention a prenuptial agreement, Spears asks for custody of the couple's two children, with visitation rights for Federline. The filing does list as separate property, and thereby off-limits to Federline, "miscellaneous jewelry and other personal affects,'' earnings and other assets to be determined later.

Federline, the former backing dancer has two children from a previous relationship with the actress Shar Jackson.