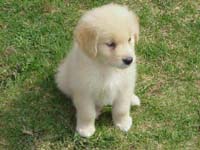 A girl from an ordinary family loved her pet dog very much. One time when the two were separated, the dog received major food poisoning. At the same time the girl was hospitalized without a clear diagnose.

She begged for her family to bring in the puppy but no one pay attention to her plea. According to the witnesses, the moment the dog died the girl regained her consciousness and said, “Good bye, Cheyz,” calling him by name.

Following the puppy’s death she developed a dystrophy, and even though the parents continued brings other animals into the house, the girl was not feeling any better.

A year ash passed, and the father noticed that his daughter’s behavior changed. The girl began to smile and to play with her stuffed monkey. The father saw her throw the monkey on the floor and then watched the monkey go back to the girl.

At first he thought that he was hallucinating but that same night he heard claws on the floor and noticed wet steps of doggie feet. And the girl was healthy again.

Kseniya Kunchiy, a paranormal psychologist, that in rare cases it happens that an animal shares its soul with the human. This was one of such cases, and the dog came back invisible.

It is a rare gift – to be able to bring back the deceased through the power of love.