Mikhail Anikin, a Russian scientist and art historian at the Hermitage Museum in St. Petersburg, is planning to file a suit against the author of the best-selling novel The Da Vinci Code, Dan Brown. Last week the American writer was vindicated in a court battle with two British historians who accused him of plagiarizing their nonfiction book. 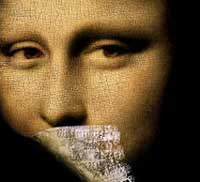 Now Mikhail Anikin, the man who managed to crack the “code” of the famous painting by Leonardo Da Vinci, maintains that it was he who has coined the phrase used as a title of the religious thriller.

There had been eight versions of La Gioconda “personification” until recently. According to one of them, the painting is Da Vinci’s self-portrait. After completing a lengthy scrutiny of the painting, the senior researcher at the Hermitage Mikhail Anikin put forth a totally different decoding. He believes the painting is not a portrait, it is an allegory.

Anikin believes the painting is made up of two different images. The right half of the figure has a lot of similarity to a canonical representation of Jesus Christ while there is a remarkable degree of similarity between the left half and the Virgin Mary portrayed by Da Vinci in his other paintings. As a result, the painting in question is two main images of Christianity combined or a portrait allegory, as Anikin puts it.

The discovery is mentioned in the scandalous book yet it contains no reference to Anikin. The Russian researcher explains how the American author got hold of his discovery: “An exhibition of works by Rene Magritte was slated for 1988 at the Hermitage. A team of experts from the Museum of Houston arrived in St. Petersburg for preparation purposes. I was appointed a curator from the Hermitage. One day we had a lively debate over Da Vinci’s work so I told the Americans about my interpretation of La Gioconda. By the bye, I was using the English word “code” while telling my story. I used it for getting across the Russian word zagadka (mystery) to foreigners.”

One of the Americans liked Anikin’s version quite a lot. He liked the story so much that he requested Anikin’s permission to pass it on to his friend, an author of detective novels. Anikin granted the permission on the condition that a reference to the discovery of the Russian scientist should be made in a potential book.

However, Dan Brown never mentioned Anikin’s discovery in his novel, which sold 40 millions worldwide. Instead, he mentioned it as a “well-known opinion of a number of scientists.” Anikin compiled his research into a book “Leonardo Da Vinci or Theology on Canvas”, which was published in 2000 – three years before The Da Vinci Code began selling like hot cakes.

“Needless to say, I have good cause for complaint regarding the American writer Dan Brown. I will probably bring a lawsuit against him,” said Mikhail Anikin, in an interview to MK.