“If you want to explore the character of a person, look at a dog that he or she might own. If a couple is a perfect match, they live in perfect harmony. Russian President Vladimir Putin and his Labrador Koni is a bright example of it. Not many people know, however, that Koni is not the central fauna representative in Putin's family. Putin wife's poodle, Tosya, requires a lot more attention and care. A correspondent of the Moskovsky Komsomolets interviewed the “hairdresser” of the Putins' poodle. 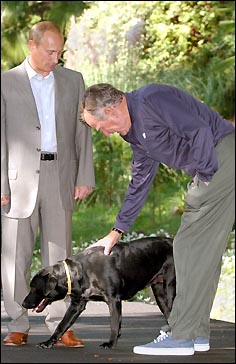 ”A Labrador is one of most reliable dogs. There is no need to cut, wash and arrange its short fur. It is simply a dream dog. A poodle is an absolutely different matter,” Aurika said, a dog “hairdresser” who has many years of work experience. Aurika trims elite dogs of Russian businessmen and politicians. Tosya, Lyudmila Putin's little poodle, is one of her clients.

”I have been taking care of Lyudmila Putin's little dog for quite a long time already. One trimming costs 150 euros. It is recommended to trim dogs' fur once a week, although it is definitely a problematic thing to do. That is why they bring Tosya to my place once or twice a month. It is a very lovely, little home dog. They get along with Labrador Koni perfectly well. Labradors are not conflict-loving dogs at all, especially if they have been trained properly. I have to say that Putin is a very good trainer,” Aurika said.

It is not Lyudmila Putin herself, who brings Tosya to the hairdresser, of course. It is usually one of the drivers, who takes care of the duty.

”I make a fashionable trimming for the poodle – in lion's style. It is a very nice classic trimming. By the way, poodles are becoming fashionable again. We should probably say thank you to the president's wife for it. The Labrador was one of the most fashionable dogs in Russia for a long time. The trend started in 2000, but it is fading now. That was the time when everyone wanted to buy a “real man's dog” – the Labrador became a politically important breed too,” the hairdresser said.

Lyudmila Putin is not the only fan of poodles in the political community of Russia. Valeri Bogomolov, the Secretary General of the United Russia party owns one too.

”It is funny sometimes that I do not know, whose dog I am trimming. I receive a phone call and someone tells me that a car will arrive to my house, and the driver will take me away. I try not to ask unnecessary questions,” Aurika said. “Unpleasant incidents can happen as well. It was a very unpleasant experience for me to meet a dog of one of our ministers. The minister owned a retriever. The dog delivered puppies about a year ago, and the happy owner decided to give them away. When we came to take the puppies, we were shocked to see the conditions, in which they were kept. Just imagine – a garage, or even a shed. There are a lot of soldiers in the shed, who do not care about the puppies at all. The place was very smelly. The dog and three little puppies were lying on the floor in the middle of that hell. The soldiers gave some dry food to the dogs, but they forgot to give them water. When I arrived, the four dogs were at death's door. I would never think that a minister would treat his dogs like that. It is brutal, and it says a lot about him,” the dog “hairdresser” said.

George W. Bush's Scottish Terrier Barney is a constant presence on television. The American president has even become a film director especially for his dog. The head of the White House made a short film about the “first dog of the States” last year. According to the scenario, Barney chairs the committee to meet Miss Beazley, the terrier's puppy, which George Bush gave for his wife's birthday. It is worth mentioning that the previous US President Bill Clinton was a fan of Labradors, like Vladimir Putin. Clinton's Labrador Buddy did not star in any films, though.